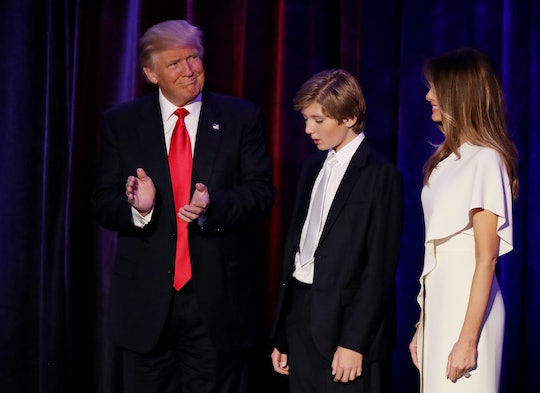 After taking the stage for the first time as the President-Elect (a phrase I'll need to remind myself again and again is a real thing) of the United States, Donald Trump was flanked by his wife, his children, friends, relatives, supporters, and loved ones. Most notable of the group? His 10-year-old son, Barron. Though he typically shies away from public events tied to his father's campaign, photos of Barron Trump at the Trump victory party hint at how visible Barron will be once he takes up residence at 1600 Pennsylvania Avenue.

Though Trump's youngest son (and first and only child with his wife, Melania) wasn't a staple at the debates (both in the primary and the three where Trump faced off against his opponent former Secretary of State Hillary Clinton), Barron's presence tonight was likely done in part to send a message that Barron will be a staple in the Trump's move to the White House in January. There's no hard-and-fast rule that says children need to be in the White House every time we elect a new president, but it's hard not to picture kids in the White House. Even though we'll be saying goodbye to the Obama daughters, Barron Trump, who's 10, will most likely move into the residence with his parents for the duration of his father's presidency.

The President-Elect has often shied away from putting his youngest son front and center, and to be honest, I can't blame him for that. It's absolutely understandable to want to keep your kids' privacy as private as possible, and at 10 years old, there aren't many things about Barron that the media or general public need to know about Barron. In fact, keeping Barron hidden from the world of non-stop scrutiny is a right that both Trump and Melania reserve to oversee as they see fit. No matter how people feel about their politics, the way they've chosen to parent their son is entirely their business.

However, that said, I won't lie: Some of Barron's facial expressions were so on point tonight that I wondered if he was putting on a show, or if he was just exhausted from a night spent in a suit in a fancy building surrounded by people he doesn't know. Regardless, here are the best images:

Even if I don't agree with his father's politics, it's safe to say I felt Barron's pain tonight. In truth, I think we all did.