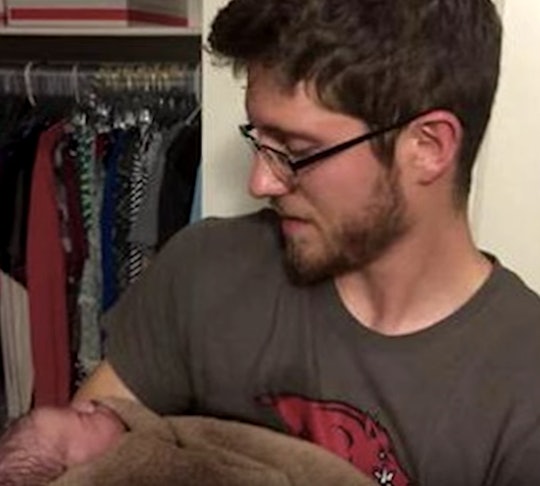 Marrying into the Duggar family has to be a pretty big adjustment. Not only will you have to impress your spouse-to-be's ultra-religious parents, you'll also have to get in the good books of his or her 18 brothers and sisters. And on top of that? Your relationship — including your engagement and eventual wedding — will inevitably play out on camera as part of a reality show (no pressure). None of that seemed to phase 21-year-old Ben Seewald when he began "courting" his now-wife Jessa Duggar Seewald in September 2013 though, and these days the couple shares two children together. Photos of Ben Seewald and his kids show that he is a devoted father to his two young boys, and that he and Jessa have one seriously cute family.

Ben and Jessa welcomed their second child, Henry Wilberforce Seewald, into the world on Feb. 6, according to Us Weekly, and in a video interview with TLC shortly after, the Seewalds introduced their newborn son to the world, and shared that his birth was an emotional experience. Jessa explained that she cried the first time she held Henry, and shared that "Ben had tears in his eyes" too. Like all of the Seewald family's big moments, Henry's birth will likely be shown on Counting On, but in the meantime, Jessa and Ben have been keeping fans updated with plenty of sweet photos and videos via social media.

Ben may be a young dad — he was only 20 when his first son, Spurgeon Elliot was born — he looked super proud of his new little family in a photo Jessa posted to Instagram to announce their then-unnamed son's birth.

It took about a week for Jessa and Ben to announce the name they had picked for their son after his birth (in all fairness, naming a child is pretty tough!), but when they finally did so, it definitely surprised a lot of people. In a video on their website, Ben and Jessa confirmed that they had named their baby boy Spurgeon Elliot Seewald, and in an interview with People, Ben explained they'd chosen the name in honor of British Baptist preacher Charles Haddon Spurgeon, someone he called "a great preacher of the past" who "really impacted [his] life."

Caring for a newborn can be nerve-wracking for some dads, but Ben seemed more than happy to jump right in. In a 2015 interview with TLC, Ben discussed waking up in the night to change Spurgeon's diaper, and the importance of properly burping a baby before you move them to avoid a spit up disaster. As for his favorite part of new parenthood? Ben said,

[It's] whenever we're holding Spurgeon, and he starts making these hilarious faces at us. I came home from work and I was holding him, and he started raising his eyebrows at me like, 'hey Dad, what's up?' It's funny trying to think, 'man, what's going through his mind right now?'

A man's first-ever Father's Day is a pretty special milestone, so Jessa shared a sweet video clip of Ben and Spurgeon together on their "first Father's Day with Spurgie out of utero." The father-son duo looked pretty enamored with one another, and Ben seemed super proud of his growing boy. This year, of course, Ben will have even more to celebrate, since he now has two sons to share the day with.

Little Spurgeon may not have been old enough to talk, let alone play football, but in a post on Jessa's Instagram account, the babbling tot could be seen watching an Arkansas football game with his dad on the computer. Future fan in the making?

Another On The Way

Ben and Jessa announced back in August that they were expecting their second child in February, and told People in a statement that they were "overjoyed to announce that Spurgeon has a new title in life as ‘big brother!" Having two children so close in age isn't easy, and Spurgeon was only 9 months old when Jessa spilled the beans about her pregnancy. But the couple has made no secret of their desire to have a large family one day, and have also looked into adopting.

Jessa and Ben continued to share updates throughout her pregnancy with Henry, including this too-cute family photo taken by Jessa's sister Jinger, featuring her growing bump.

Since Henry's arrival, the Seewalds have been sharing photo and video updates with their fans, sharing glimpses of their new life as a family of four. And while they admit it hasn't been entirely smooth sailing (she told People that Spurgeon "thought Henry was a toy" upon their first meeting), it definitely seems as though they are so happy now that their second baby has arrived.

There's no doubt that Ben and Jessa have their hands full these days with two young boys. But it seems as though their relationship is totally solid, and that they are both super dedicated parents, so chances are they'll have no problem figuring it all out. And with a family as large as Jessa's, if they ever run into difficulty, it probably won't be very hard to find someone willing to help them out.