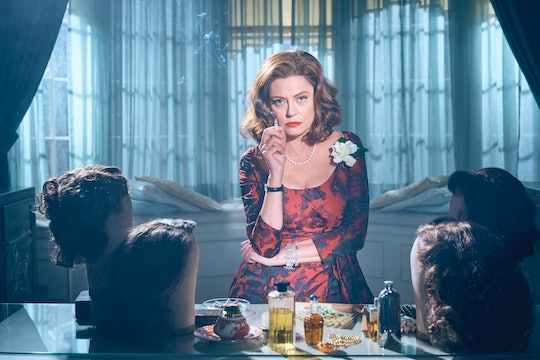 Photos Of Bette Davis & Her Kids To Obsess Over

FX's Feud: Bette and Joan takes a look at being a woman in Hollywood at a very specific time, and how major stardom impacted the lives of two of the most successful actresses in Hollywood history — as well as how it affected their families. As much time as the show spends on the nuts and bolts of filming What Ever Happened to Baby Jane?, it also explores the complex personal lives of both Joan Crawford and Bette Davis. Given particular focus is Bette's bond with her eldest daughter B.D., which is loving and contentious by turns. In real life it was even more complicated, but these photos of Bette Davis and her kids don't even hint at the drama occurring off-camera.

Davis was mother to three children: B.D. (short for Barbara Davis; she was Davis' daughter with her third husband, William Grant Sherry), Michael, and Margot (both of whom were adopted with Davis' fourth husband, Gary Merrill, who also adopted B.D.). Davis' relationships with her children were definitely difficult, and while her co-star Joan Crawford was more famous for being an imperfect mom, Davis wasn't free of trouble herself. Though she loved her children, it wasn't always smooth sailing in the Davis household.

While Davis appeared to be especially close to B.D., often bringing her along to set and to premieres, their relationship ended up fracturing when B.D. was a teenager. At 16, she married a man 13 years her senior, which only made Davis and B.D.'s relationship more strained. B.D. moved ever farther away from Davis, becoming a mother at 22 then an intensely religious born-again Christian, and finally penning a memoir about her mom called My Mother's Keeper.

"I believe it was this union that, years later, produced B.D.'s book about me," Davis said of her daughter's marriage. While B.D. would insist that she wrote the book to try and repair her relationship with her mother, it really did the opposite. In 1987, Davis told Bryant Gumbel during an interview, "We can hardly have a close relationship like that after a book like that is written about you. I lost her... Realizing she had written this book about me was as catastrophic as the stroke."

Davis had suffered a stroke, broken hip, and a mastectomy shortly before the book's publication. She and B.D. were not in contact at the time of Davis' death, and B.D. was excluded from her mother's will.

However, Davis appeared to have a good relationship with her son Michael. He also stopped speaking to his older sister following the release of My Mother's Keeper and supported his mom, later co-founding the Bette Davis Foundation to honor her. It gives scholarships to aspiring actors and other students in the entertainment industry. Davis confirmed her solid relationship with her son to Gumbel, saying, "I loved my children very, very much. I think I was a good mother. My son does too. That's a comfort, that one child agrees."

Her younger daughter Margot was found to have brain-damage when she was only three years old, and spent her life in institutions.

Davis struggled with motherhood, particularly when it came to balancing her family with her career, but her children were still an immensely important part of her life.