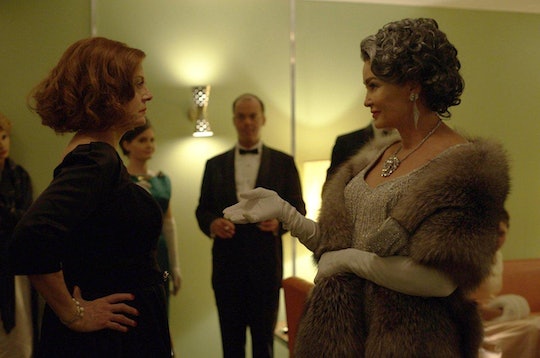 Photos Of Bette & Joan That Make You Question Their 'Feud'

By now, fans of FX’s newest anthology drama Feud know enough about the relationship on the series to decide if they’re either Team Joan or Team Bette, but the real-life photos of Joan Crawford and Bette Davis tell a story that isn’t necessarily built on a mutual hatred. Of course, there was the rivalry that was goaded out of them, as seen in the show, and one that was nurtured by Jack Warner in order to keep the fire on-screen and get constant publicity for What Ever Happened to Baby Jane? even before the movie was released.

But something tells me that Crawford and Davis’ real-life feud could have been a lot tamer if there had been no interference by the Hollywood bigwigs who wanted so badly for there to be a hot-headed feud between the two actresses. Just look at the instance on the show, when they both wanted the younger starlet to leave and they were able to work together to achieve that. Clearly the women were at similar points in their lives and their careers, and working together was what came naturally to them, even if Warner was intent on doing everything to keep a rivalry going.

In real life, when Davis and Crawford began production on What Ever Happened to Baby Jane?, they were already Academy Award-winning actresses, but due to their ages, they were no longer getting the parts they craved. They were being cast in supporting roles or as mothers (or grandmothers) rather than the main heroines — a problem that sadly still exists in Hollywood today. The movie gave them both the chance to change that, but since both of their stars were so bright, it seemed only natural for them to butt heads.

On Feud, one of the driving forces keeping the rivalry going between the women is the gossip columnist Hedda Hopper, who is intent on getting something juicy to write rather than the news that Crawford and Davis were working well together on-set. But the real-life photos make you wonder how intense the feud really was. Though, of course, photos can be misleading.

In some of the images of Crawford and Davis behind the scenes of their movie, the actresses can actually be seen talking and laughing together, much like they were in the one scene on Feud that had their director changing things up soon after to keep a feud between the women strong rather than a friendship that might make them stronger against him.

It’s no big scandal that Ryan Murphy took some creative liberties with Feud, creating a bright and semi-non-fiction world of the early '60s glam Hollywood, but I refuse to believe that Crawford and Davis were as cut throat as the media wanted them to be at the time. Or, at the very least, these pictures make me second guess it for a while, even despite the many things they've said about one another in the past.

However real the animosity was between Crawford and Davis, it’s clear from Feud that a lot of it was pushed on them as they were each manipulated by the powerful men of Hollywood at the time who wanted nothing more than to make money, regardless of how the women were perceived or what it did to their psyches.