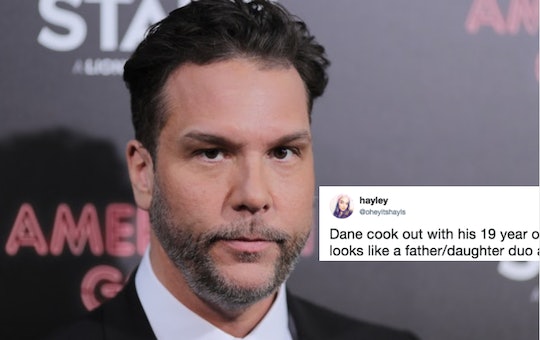 Dane Cook Is Dating A Teenager & People Are Seriously Grossed Out

Comedian Dane Cook has long been a lightning rod, with people debating everything from whether he should've been accused of plagiarizing jokes to whether his comedy style is for them. Now, though, he's at the center of a different kind of controversy. See, photos of Dane Cook and his 19-year-old girlfriend have surfaced, and the internet is all kinds of fired up about them. Turns out that the idea of Cook dating someone still in their teenage years has seriously grossed some people out

Cook, who is now 45, is reportedly dating a 19-year-old singer named Kelsi Taylor, according to E! News. Over the weekend, the two of them went on vacation to Hawaii, and they did not hold back on the PDA. As a source told E! News, "Dane and Kelsi flew in on a private jet to Maui last Thursday... He and Kelsi have already been once and they couldn’t wait to come back with friends for another vacation." Needless to say, the paparazzi were all over the couple, and pictures of the two of them, published by E! News, enjoying their romantic vacation soon flooded the internet. Soon enough, people on Twitter noticed the pictures of the couple romping around in their bathing suits, and started having a lot to say.

Although Taylor isn't yet old enough to drink or rent a car, and although Cook got his first big break as a comedian performing on Comedy Central the same year that Taylor was born, Taylor is legally an adult, so there's nothing technically wrong with their relationship. Still, many people got a little creeped out by the 26 year age difference.

The duo hasn't been secretive about their relationship up until this point. They've posted plenty of effusive social media captions and lovey-dovey pictures. It just seems like no one had particularly noticed the relationship (perhaps nobody is staying super up-to-speed on the everyday happenings in Cook's life right now) before the new paparazzi photos burned it into the internet's collective consciousness.

Turns out that Taylor and Cook have been going strong over the past year, as Us Weekly reported. They spent Christmas together, at least according to her Instagram.

And back in July, when she was 18 years old, she posted a picture of them on what seems to have been their first Hawaii trip together, with the caption, "maui dinner. i'm in a dream. my favorite man, my favorite view."

Similarly, in an Instagram that Cook posted about the same Hawaii trip last July, he wrote:

Just a couple of happy people bobbing around in the Pacific Ocean off Maui with our friends watching the sunset. This was the last day of a truly remarkable trip. For a whole week our gang never had to fill any time with any downtime "bored on vacation" activities. Hiking, boating, snorkeling, dinners, movies, zip lining, waterfalls, BBQing, working out, adventuring on new beaches, swimming with turtles, hanging at the villa and just taking it all in & appreciating this moment in time. The trip was perfect but what made it unforgettable was my gf. She's a gift. She's my best friend. She's one of a kind. Thx Kelsi

My girl @itskelsitaylor is one of my favorite people on the planet. She's a talented singer but more importantly she's a genuine person. Check out her music and get to know her. She's gonna go far!

Now that the paparazzi pictures are all over the place, though, the internet is having a lot of feelings about this pairing:

Hey, love can be unpredictable, and age ain't nothing but a number, and all that. Whatever they do is technically their business, as long as it's legal. But clearly these paparazzi photos have left many feeling a bit uneasy.