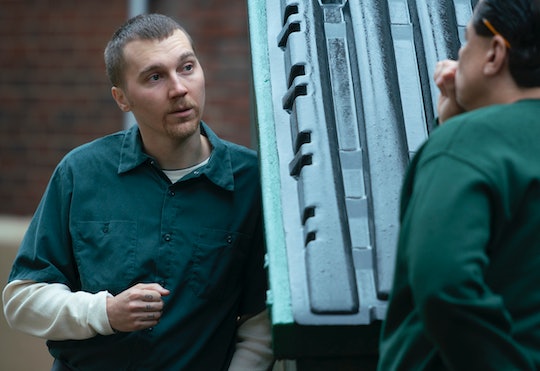 Paul Dano Had A Radical Transformation For 'Escape At Dannemora'

Although Paul Dano has found tons of success from indie movies to Broadway, most people probably know him best for his breakout role as the moody teen he played in 2006's Little Miss Sunshine. More than a decade later, Dano has long since broken out of that mold to play a variety of deeply complex characters, most recently the infamous escaped convict David Sweat. And photos of David Sweat vs. Paul Dano on Escape at Dannemora prove just how dedicated the entire team was to presenting the story accurately and authentically.

Dano is a bit younger than the real life figure he's playing — he's 34 to Sweat's 38. But sporting a radically different haircut that matches Sweat's along with gaining weight for the role helped put him on par with his subject. In fact, several of the actors featured in Escape at Dannemora underwent radical transformations that included weight gain to play their characters. Patricia Arquette, who plays Joyce "Tilly" Mitchell and Eric Lange, who plays Lyle Mitchell, have both spoken publicly about the significant weight gain they undertook to more closely resemble their characters. In Dano's case, he was also able to spend quite a bit of time with the real person behind his role, even though Sweat was supposed to be serving time in solitary confinement while the series was shooting.

"Ben Stiller got us in there," said Dano of Escape at Dannemora's executive producer/director in an interview with iMDB. "He finds a way. We got to go meet David Sweat."

Dano went on to explain how difficult he found it personally to spend so much time in a prison, citing "the energy, the smell, the density of the air, the sense of danger" as being particularly challenging. (The cast and crew shot on location at Clinton Correctional Facility, the real prison from which Sweat and Richard Matt escaped in 2015.) But, Dano admitted, it was helpful in channeling Sweat to see and experience the humanity of prisoners in person.

Dano went on to say:

"Something David Sweat talked about was that you basically had to tuck parts of yourself away, you have to put up something. That was an important element to the character that came from meeting him...And again, repression, right? The cells? Putting somebody in a cell? The front that we sort of have to put up and not deal with any other parts of ourselves because we can't have anybody see it and even your sleeping space is visible? All those parts of yourselves getting pushed down I think creates a lot of — whatever it is, for rage.