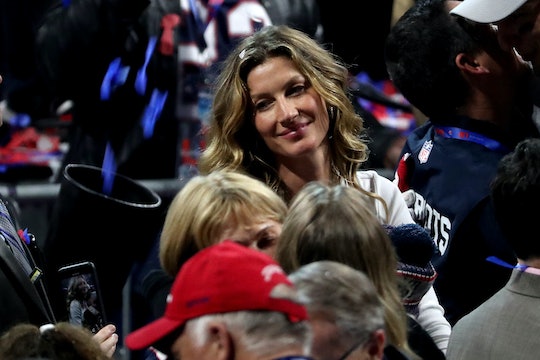 Gisele Bündchen Was *Into* Watching Super Bowl LIII, As These Pics Prove

Gisele Bündchen and Tom Brady married just shy of 10 years ago in 2009, and Bundchen has been at an astonishing five Super Bowls in the years since (counting Super Bowl LIII, Brady has appeared in eight Super Bowls total). As these photos of Gisele Bundchen at this year's Super Bowl show, the model and author is a bigger fixture of the football post-season than Beyoncé.

She's more plentiful than tiny football-shaped cupcakes, more versatile than Ina's patented Super Bowl dip. And this year, the primary breadwinner in the Brady household wound up for her fifth appearance by going on an absolute press bender, lifting the lid on her breakup with Leonardo DiCaprio in the cover story for Porter's February 1 issue. She talked about her panic attacks back while the two were dating, realizing that she needed to wake up and examine her way of living. Unfortunately, DiCaprio was pretty happy with the caffeinated life — Porter writer Carolyn Kormann quotes from Bünchen's book: "Was I alone in wanting to do some serious soul-searching while he stayed the same? In the end, unfortunately, the answer was yes."

Present at Mercedez-Benz Stadium in Atanta, Georgia, to cheer on the New England Patriots as they took on the Los Angeles (neé St. Louis) Rams, Bunchen wore a white shirt and navy pants and looked invested in the game from head to toe. Her hair, as one would hope, was styled into shiny tousled waves with a middle part. It was, it turned out, a victorious look.

As some Twitter users pointed out, reflecting back on this shot of Bündchen sipping her trademark red wine during last year's game, she has seemingly morphed into Faith Hill as time has marched steadily on through three slow-as-molasses quarters and one slightly exciting final free kick.

On Saturday, she posted a photo to Instagram of herself with her husband on the field in the vast, empty stadium, a cellphone seemingly suspended above the turf by anticipation.

She also posted a photo of the couple's daughter, Vivian Lake Brady, 6, wearing a Patriots jersey with Brady's name and number on the back.

As fate would have it, her husband walked away with his sixth Super Bowl win in 2019, as USA Today reported, proving that Bündchen was indeed his rock, as she had earlier posted on Instagram. Perhaps all any of us need in this life is to have an unfailingly loyal and rock-steady partner sipping wine and occasionally throwing up their arms in excitement; their silky hair swishing with the action. Perhaps we just need a Brazilian supermodel in our corner to remind us that Leo didn't stand a chance; it was always us.

We should also credit Vivian Lake's sweet wish to her "papien" with the win — are our children not the wind beneath our shoulder-padded wings?

One thing was clear as Super Bowl LIII pulled off its socks and packed away the laser light projectors from the Maroon 5 disco party: Super Bowls halftime shows come and go, but Bündchen, Brady, and WINNING are forever.