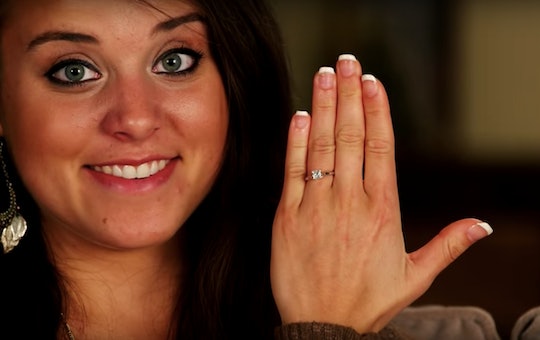 These Photos Of Jinger Duggar's Engagement Ring Show Her Simple, Yet Stunning Taste

If you thought that it was hard to keep up with the Kardashians and all their baby news, then you clearly haven't been keeping up with the Duggars. Nowadays, it seems like not a week goes by without a Duggar announcing they're getting engaged, married, or are pregnant. And after one specific Duggar just announced that she's expecting her first child, fans are wondering if there are any photos of Jinger Duggar's engagement ring out there to reminisce about the time when the 24-year-old was just getting started with her new life.

The Duggars are a big, busy family, and there are a lot of kids to keep track of. But, this is about Jinger, one of the older Duggar daughters and one of the stars of TLC's 19 Kids and Counting spinoff series, Counting On. And that's not all she is. Jinger is also considered to be somewhat of the Duggar family rebel. Besides the fact that Jinger deigns to wear pants, she also didn't get pregnant until quite some time after she was married. Joy-Anna and Kendra have both recently announced that they are both now pregnant following their recent weddings, but Jinger and her husband Jeremy Vuolo ended up waiting 14 whole months before announcing that they were expecting.

But, let's back up a bit, back to the time of Jinger and Jeremy's engagement. And, of course, what does Jinger's engagement ring look like? After all, 14 months is a long time for fans to forget what kind of rock Jeremy got his special lady.

Now, while Jinger and Jeremy certainly share a lot of their lives with the public and via their social media accounts, that doesn't mean that they show off all that much. Especially considering the fact that one of the main Duggar rules is modesty, it makes sense that Jinger wouldn't want to show off her ring all that much, even though it's totally gorgeous.

But, that doesn't mean she isn't entitled to post a few cute photos of the ring anyway. After all, in an exclusive video with TLC, Jinger's sister, Jessa Seewald, is seen gushing about how well Jeremy did in picking the ring out. "The ring is so perfect," she says in the video above, "it's so Jinger." Jessa also explained that she knew Jinger wanted something classic, and that Jeremy delivered.

"She had told me beforehand, she said, 'I don't want something too bling bling, kind of simple.'" And Jinger's now-husband definitely followed through on her taste. And while she might not like to brag, there are some pieces of photographic evidence of Jinger's ring that show how beautiful it really is.

And the ring isn't even the most beautiful part of Jinger and Jeremy's engagement. Seriously, Jeremy planned a pretty elaborate proposal for his now-wife, and the 30-year-old clearly put a lot of thought into the big moment. According to Us Weekly, Jeremy "had enlisted a few friends to help orchestrate the surprise, which involved a photo shoot at sunset on the rooftop of a New York City building with the Empire State Building in the background, and a few musicians playing one of their favorite songs to set the mood."

So, yes. Jinger and Jeremy's life together is pretty darn perfect. They started on a romantic rooftop in New York City, and now they're getting ready to bring a baby into the world together. In their statement to Us Weekly regarding their happy news, the couple said:

We both looked forward to the joys of marriage but neither one of us fully understood just how amazing the start of this journey would be. Truly, the Lord’s mercies are new every morning! Now, the journey has taken an exciting turn: We are expecting our first child!

From courtship to engagement a wedding, and now a baby, Jinger and Jeremy are certainly on track to live their best lives.