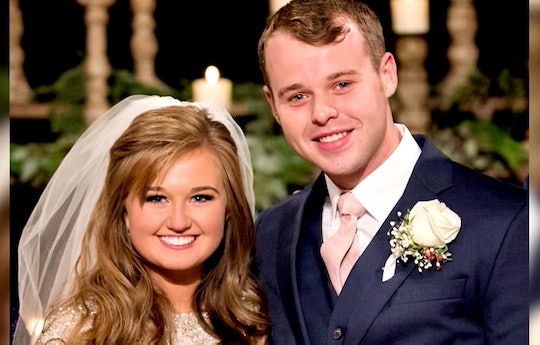 It wouldn't be a season of TLC's Counting On without a new courtship, engagement, wedding, or baby, now would it? Most recently, it was Joseph Duggar's turn to walk to the aisle. (And have his first kiss!) On Sept. 8, Joe, 23 — who is Michelle and Jim-Bob's seventh child — exchanged vows with Kendra Caldwell, 19, in a classic, Duggar-style wedding. In fact photos of Joseph Duggar's wedding show it was a huge family affair.

According to TLC, the couple tied the knot in Arkansas with Caldwell’s father officiating. “It is an amazing feeling to be husband and wife,” the now 23-year-old told People. “It’s something that I’ve always dreamed of to have a wife and to raise a family in a way that honors the lord. We are to very excited to see what God has in the future for us.”

For those who aren't familiar with their backstory, Joseph and Kendra are actually longtime friends who met at church when they were young, according to Us Weekly. The lovebirds confirmed their courtship in March of this year. Not wasting any time, Joseph and Kendra's engagement actually happened at Joseph's sister, Joy-Anna's wedding back in May. Like most Duggar relationships, it's certainly been a whirlwind romance. "It's kind of a crazy feeling that we're husband and wife now," Joseph told TLC after the ceremony. "I don't think all of that has sunken in yet." Here's a look at what else the happy couple had to say after exchanging their vows.

Here's a shot of the gushing bride posing for photos with some of her bridesmaids. In the one below, I spot her sisters-in-law, Jana, Joy-Anna, Jinger, Jill and Jess. And, according to People, Johannah and Jennifer were also bridesmaids, in addition to Kendra's mother. (I mean, how cool is that? I've never heard of the mother of the bride serving as a bridesmaid.) The bride's sister, Lauren, was the maid of honor.

And just look at that gorgeous gown. According to People, "the bride wore a Renee Miller jeweled top with princess skirt for her big day." (Ohh, sparkly!) The groomsmen wore blush-colored ties. As for the official wedding colors, they included navy, burgundy and soft yellow. The theme was "classic and formal with a romantic evening feel," People reported.

Joseph's brother, Josiah was the best man, according to TLC. He was joined by brothers John David, Jedidiah, Jeremiah, Jason, James and Justin as groomsmen. Notice that the only older brother missing from this lineup is Josh, and considering his epic fall from grace, I'm not at all surprised.

The night before their big day, Kendra and Joseph enjoyed Mexican food and ice cream at their rehearsal dinner, People reports. (Maybe it's just me, but tacos and dairy wouldn't be my first choice the night before saying "I do." I would be too worried about excessive gas and bloating for the ceremony. But to each their own.) Also keeping in line with the Duggar tradition, a reception was held without a full meal (and likely excluded dancing, too). Instead, the couple opted to serve cupcakes and salty snacks. Which makes sense financially, considering how many guests tend to show up to these shebangs.

As controversial as the Duggar's views are on things like relationships, modesty, same-sex marriage and a woman's body, I can't help but fawn over their gigantic weddings. It's cool, to me, how they manage to include most members of their family in the ceremony itself — despite the fact that there are million of them. I'm sure it was super sweet that Kendra's father had the opportunity to officiate the wedding, with Kendra's mother standing by her side as a bridesmaid. And of course, all of the older siblings were in the bridal party. (You know, minus Josh.) But that's basically a given at this point.

Congrats on your big day, Joseph Duggar! May your wife be allowed to wear pants, your daughters be permitted to attend college and your marriage end up infinitely less scandal-filled than your eldest brother's!