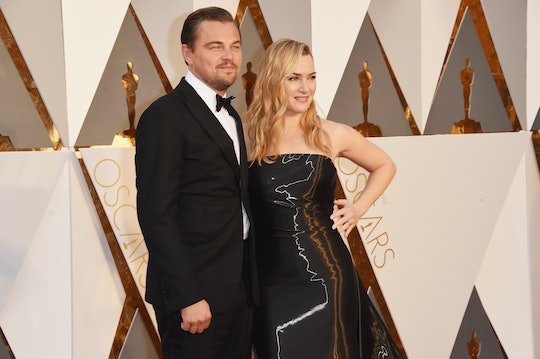 Titanic fans, are you ready for the ultimate throwback? Sunday night, Kate Winslet and Leonardo DiCaprio posed together on the Oscars red carpet, and the world got collective shivers. I can't be the only one picturing Jack and Rose together all these years later, with Céline Dion's "My Heart Will Go On" playing in the background.

It's been nearly two decades since Titanic took over screens across the world, but nobody's forgotten. Nor, it seems, have Winslet and DiCaprio, who have been friends for those 19 years. Even in 1997, DiCaprio said of their friendship:

[Kate]'s such a terrific person in general that our chemistry naturally happened on screen. We just like each other as people. As far as doing a love scene, though, we laughed about it a lot.

At the Oscars tonight, when six-time nominee DiCaprio scored an Oscar for Best Actor, Winslet welled up in the crowd. She wasn't nominated for her own role in Steve Jobs this year, but that seemed completely unimportant to Winslet when DiCaprio won. In the past, she even gave DiCaprio a shout-out when she took the stage to receive a Golden Globe for her role in 2008's Revolutionary Road, saying,

Leo, I'm so happy I can stand here and tell you how much I love you and how much I've loved you for 13 years. I love you with all my heart, I really do.

Now that is #squadgoals.