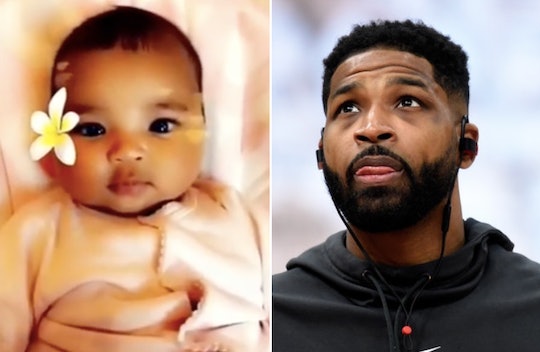 Ever since Khloé Kardashian gave birth to her first daughter with Tristan Thompson back in April, the world has been thrilled to learn more details about who Kardashian calls her "little love." Though there are some things Kardashian has made public, such as that True spent the first months of her life living in Cleveland, or that she has a perfectly pink (and quite expensive) KarJenner-approved nursery, or that she uses a red lightbulb to stay asleep at night, there's one thing we know more than absolutely anything else: who True resembles most right now. In fact, these photos of baby True compared to photos of Tristan Thompson prove they are totally twinning, just like Mama Khloé has said.

Before Kardashian shared the first photo of True on social media, People reported that she responded to fan tweets saying "Tristan and True are twins lol it’s crazy," and "Everyone tells me they are identical lol it’s wild. Maybe her eyes will stay light and I can get something." The day after True was born, Kim Kardashian West also tweeted to say "Guys, she's so gorgeous!!!!" People reported.

But now that many months have passed and Kardashian has been more open to sharing pictures and videos of her daughter on Instagram, we can confirm that she does indeed look a lot like her dad, and these photos are the proof.

Back in June, Tristan posted one of his first updates with True on his Snapchat, according to People. "Baby True! Daddy loves you!" he wrote. This comes just weeks after a lot of backlash surfaced as he didn't announce nor post anything about True until two months after she was born.

In the wake of his alleged cheating scandal, according to Refinery 29, Thompson kept a low profile and avoided talking about Kardashian or his kids online or in public.

That plan seemed to have backfired, but he did eventually post a photo of himself with True and his son Prince, whom he shares with ex-girlfriend Jordan Craig, according to People.

In the months since True's birth, it's mostly been Kardashian who has been updating fans with photos of her daughter. On June 13, for instance, Kardashian shared a few photos of True, and immediately fans responded saying how cute she was, and that she's "her dad's twin," as one comment read.

Though Thompson did not respond to whether or not he agreed that True looked a lot like him, he said parenthood "changed" him, and how raising a daughter is different than a son, according to PopSugar. As he previously told UNINTERRUPTED's Road Trippin' podcast hosts Richard Jefferson and Allie Clifton:

On May 12, exactly one month after she was born, Kardashian posted the very first video of True to her Instagram, as Extra TV reported at the time. In it, True is cooing at her, and you can hear Kardashian saying: "Happy one month old mama."

Fans immediately rushed to congratulate the new mom. "She is the most adorable baby I have ever seen!" one fan wrote. "I know you will be the best mother in the world true is a lucky girl and she is so beautiful," said another.

However, despite all of the love that True has gotten from her family, Kardashian found herself hard pressed to deal with the trolls as many people were verbally abusing her daughter online, calling her "not cute at all."

Kardashian replied, according to Cosmopolitan, saying: "What self-respecting adult would even comment on a child’s appearance? What type of disgusting human being are you? It’s pathetic that you are this miserable in your life."

Of course, however unfair it certainly is, trolling is often par for the course for celebrities and their kids. Despite the inevitability, it's clear that Kardashian is making the best of it, and refusing to allow the haters to bring her down.

As far as her relationship goes, it seems as though she and Thompson have reconciled their issues there as well. E! News reported in early December that Kardashian wants to try to have more kids with Thompson, despite the aforementioned alleged affairs. "Khloe definitely wants True to have a sibling and would love to have a big family if that's what's in the cards," an anonymous source told the network. "Things are up and down with Tristan Thompson, but she would like more kids with him. That's what she feels will make the most sense for True and their little family."

Though neither Thompson nor Kardashian have confirmed the rumors, a few weeks prior, Thompson also posted a photo of him, True and Kardashian, expressing his gratitude for his family, so it seems as though they are on board.

Like anyone else, this family is navigating their way through the peaks and valleys of life and parenthood, and letting us all follow along.