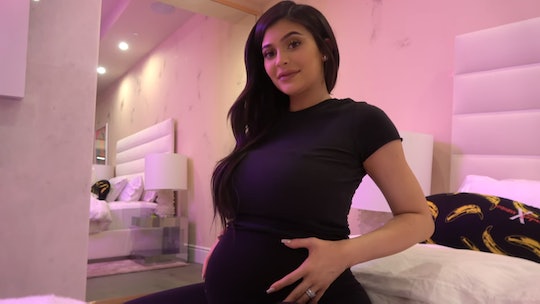 It's been quite a while since the youngest sister of reality TV's royal family shared any recent pics of herself, and fans might be wondering what they missed out on these last few months. These photos of Kylie Jenner throughout her pregnancy show that it was a busy time for the lip gloss mogul, and although news of her rapidly growing family might have sidelined the the public, it looks like she was completely ready for whatever life handed her.

Throughout the fall and winter of 2017, Jenner's Instagram and Snapchat accounts took a sharp turn from full-body photos to mostly close-ups, save for a handful of throwback photos taken before her pregnancy. TMZ broke the rumors that she was pregnant in September, but she and her family refused to confirm or deny the story. Most people figured — correctly, as it turns out — that her new social media aesthetic was proof that she was expecting. On Feb. 1, Jenner gave birth to Stormi Webster, her first child with rapper Jacques Webster, better known by his stage name, Travis Scott. On Tuesday, Jenner shared a pic of her baby girl, but the 11-minute video tribute she posted to YouTube on Sunday gives fans an opportunity to catch up on what the new mom's been up to all this time.

The montage begins with a clip of Kris Jenner in labor with Kylie before diving into a few shaky shots of Stormi's parents-to-be captured during the early days of their whirlwind romance. When she's older, Stormi might be amused to realize that there's a good chance she was already tagging along for the ride during those nightclub and concert scenes. The first time her mom was captured on film when she definitely knew she was pregnant was at her own 20th birthday celebration back in August.

Jenner would have been in the beginning of her second trimester by then, and the camera picks up a clue that shows how excited she and Scott were to welcome their daughter: while the media paid plenty of attention to the diamond butterfly necklace he gave her as a birthday gift, look closely at the daintier one hanging above it. That's right, it says "Baby Girl."

That necklace was nowhere to be seen during her other media-friendly birthday party, though.

Just a couple of weeks later, Jenner, Scott, and a small entourage piled into her OB-GYN's office for an ultrasound. An off-camera voice (a doctor or technician, I assume) can be heard saying "You're 15 weeks now," and as the group oohs and ahhs at the sight of what will become Stormi, they refer to her as "she." Everyone seemed pretty pumped.

Once she started showing, Jenner kept on taking those selfie videos fans are so familiar with; she just didn't share them right away. But from her narration, it's clear that she wanted to document her pregnancy for her daughter to watch one day.

Also, as one might expect of a 20-year-old from a very fashion-forward family, she didn't hang out in sweats the whole time. In the few current pics the public saw during during her pregnancy, Jenner dressed in baggy tops to conceal her growing stomach, but behind the scenes, she was embracing the look.

It's also clear that while Jenner didn't share her condition with Us Weekly, she wasn't exactly living the hermit lifestyle. There were a lot of people who knew about her pregnancy, and were there to support her with eager anticipation.

We also have confirmation of another rumor: that party held at Jenner's house the day after her sister, Kim Kardashian's baby shower in November was indeed another baby shower, and not just your average, everyday pink rose-filled pajama brunch. Shocker!

And just in case Jenner giving birth wasn't enough to wow you, there's one more gem: our first look at her niece, Chicago West, born just two weeks before cousin Stormi. Now, on to the next Kardashian mystery: when's Khloé due?