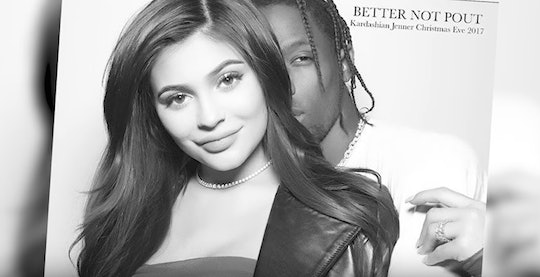 For months now, fans have speculated about the state of Kylie Jenner's relationship with the rumored father of her baby, Travis Scott. Many people are wondering if Scott and Jenner are actually still dating and whether Jenner's supposed pregnancy has tested their romance. The curiosity is reasonable when you consider that Scott and Jenner don't post about each other on social media and that they haven't been spotted together in months. Although it's totally possible that Scott and Jenner prefer to keep their romance on the DL, others are worried that they're on the outs. Luckily for the couple's most dedicated supporters, however, these photos of Kylie Jenner and Travis Scott disproves that their relationship is on the rocks.

Shortly after the Kardashians thew their annual Christmas Eve party, a few pictures of Scott and Jenner surfaced on the internet. In the cute photos, Jenner and Scott cuddle up close to one another and it appears that they're very much together. I'm not a body language expert by any means, but the photos clearly depict two people who are in a very happy and committed relationship. Although there's the possibility Jenner and Scott are just on friendly terms (friends can cuddle too, obviously), the pics seem more romantic than platonic.

The sweet pics also seem to debunk rumors that Jenner and Scott fought about where to spend Christmas day. A source told Hollywood Life a few weeks before the holidays:

The one thing they’re having a little friction over right now is where to spend Christmas day. He wants to be in Houston with his family and he wants her to come with him.

So, either Scott and Jenner were playing nice for the cameras, or they stopped fighting about Christmas day before the pics were taken. As for my personal guess, I think there never was "tension" to begin with. It just doesn't seem on-brand for how Scott and Jenner, who have been dating since April, according to Billboard, like to roll.

Plus, fans that closely follow Scott and Jenner's relationship know that the couple always seems to have a lot of fun whenever they're together. Not to mention, Scott is usually very physically affectionate with Jenner, and he often puts his arm around her when they're out and about on the town.

And back in May, Jenner and Scott were photographed holding hands while they enjoyed an evening out in Miami. Although it was the beginning stages of their relationship, Scott's arm placed around Jenner (pictured below) clearly demonstrated to fans that this was more than just a fling. Scott and Jenner also seemingly confirmed their relationship status with matching black clothing and vintage t-shirts, because why not. Jenner is all about the subliminal messages, people.

As for the only other public photo of Jenner and Scott, the two were photographed at a Houston Rockets basketball game just a few weeks before the Miami trip, according to E! Online. At the time, many fans pointed out that they made a cute couple.

Although there aren't a lot of pics of Scott and Jenner, the few photos that are public mirror what supposed sources have said about their "great" relationship.

An insider said of Scott and Jenner's romance, according to People:

Kylie and Travis are doing great. Things are so different from Tyga. There is no drama with Travis. He is a cool guy. He treats Kylie with a lot of respect and love. Kylie is very happy.

So, I think it's safe to say that Jenner and Scott's relationship is doing just fine. Just because Scott and Jenner don't post photos of each other on Instagram, it doesn't mean they're constantly on the verge of breaking up. Every relationship is different and unique, and it's totally OK if Jenner wants to keep her relationship with Scott private for now.