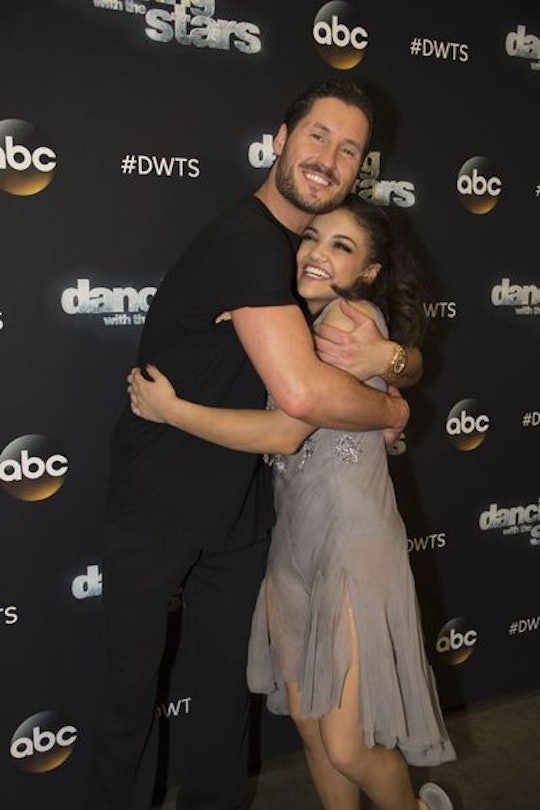 It makes sense that friendships and bonds form between the stars of Dancing With the Stars and the pros assigned to teach them how to dance like a pro in a few short weeks. But no bond is quite as adorable as that of Val Chmerkovskiy and the 16-year-old gymnast Laurie Hernandez that he's training. In fact, photos of Laurie and Val prove that this Dancing With the Stars duo are basically friendship goals that viewers should all aspire to be apart of. How could you not vote for this couple? Between Laurie's infectious giggle and Val's fatherly attitude toward her, these two are everything I've ever wanted out of a friendship.

Though just 16 years old, Laurie is a gold-medal winning Olympic gymnast, which naturally makes the move to ballroom dancing something of a natural step for her. They were the first couple to get a perfect score on the show, for their jazz routine to Michael Jackson's "The Way You Make Me Feel." They got their second perfect score on Showstoppers Week with a truly unbelievable tango to "Cell Block Tango" from the musical Chicago. But they really captured our hearts with the video packages, in which fans can see just how much love and affection there really is between these two. Val seems to look at Laurie like a daughter, or maybe a little sister.

For example, on decades night, Laurie and Val were assigned the 1960s, and Val told Laurie to think of prom. Except Laurie has never been to prom, so Val bought her a corsage and created a fun, choreographed prom for her. It was freaking adorable.

These two are also very liberal with posting so-cute-it's-almost-irritating goofy behind-the-scenes videos of their practice sessions. No wonder they're killing it on the dance floor because they are having so much fun bringing their performances to life.

Chemistry is a huge part of how a couple performs together on the dance floor, and you can almost tell when two people don't seem to work that well together (ahem, Maureen and Artem). Laurie and Val, however, are everything a good partnership should be. Why can't everyone have an adoptive big brother as sweet and fun as Val?

The finals are coming up as early as next week, which means that Laurie and Val won't be practicing their routines day in and day out anymore once it's all over. But I have a sneaking suspicion that they'll still hang out from time to time even if no dancing is involved. With a friendship like this, how could they not?