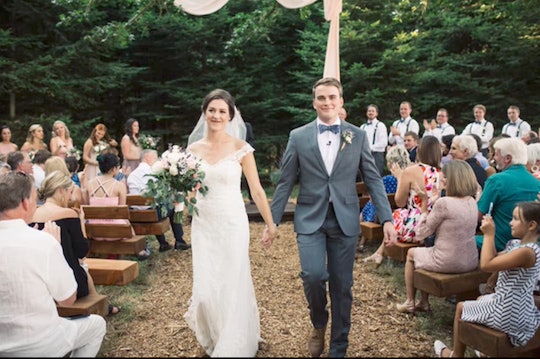 It's been sort of a tough week in the world of celebrity couple news. On Sunday, Hollywood couple Anna Faris and Chris Pratt announced that they were separating, and fans took it really hard. So any reminders that love between television or movie personalities can end in a "happily ever after" are extremely welcome right now. And fans of the TLC series Little People, Big World didn't have to look far for such a reminder. According to People, Matt and Amy Roloff’s only daughter, Molly, married her fiancé Joel on Saturday, and these photos of Molly Roloff and Joel Silvius will make you believe in love again.

According to PEOPLE, Roloff and Silvius exchanged vows on the Roloff family farm in Oregon on Saturday, at one of Molly’s favorite spots in the woods. And while the photos that have been released from the event are lovely all by themselves, past photos of Roloff and her fiancé are just as sweet and really show that the two were very much in love.

Molly's mom Amy posted a photo of the newlyweds on her Instagram, according to Entertainment Tonight, and confirmed there's "a lot of love" behind their partnership.

"She got married!," Roloff captioned the shot. "A beautiful wedding, most gorgeous bride and tears laughing smiles and a lot of love💕. Couldn't be happier for Joel and Molly (my baby girl). #secondact #tlc #lpbw #farmwedding"

According to Entertainment Tonight, Amy Roloff has known about her daughter's engagement since December, but In Touch Weekly reported that there are photos of Joel on Matt Roloff's Instagram from back in 2015. So it's clear that he's at least been in the Roloffs' lives for awhile. But according to The Hollywood Gossip, Molly is one of the most private members of the Roloff family, and she hasn't been very forthcoming with details about their relationship, so it's unclear exactly when the two began dating.

Still, a quick glance at the Instagram accounts of various family members show that Roloff and Silvius have been an adorable, happy couple for awhile now.

A photo from October 2015 that Matt Roloff posted to Instagram was simply captioned "Molly and Joel," and it appears to be the most dated public photo of the couple. In it, they are both smiling, with Molly's dad just barely nudging his way into the photo from the left while presumably snapping the shot.

But Matt isn't the only parent of Molly's to have a cute photo with the couple featured on his Instagram. Back in May, Amy posted a picture of herself with her daughter and Joel as well, during a visit Molly and Joel made. According to Heavy, the two live in Spokane, Washington, which may be one reason they aren't on Little People, Big World more often.

Tori Roloff, the wife of Zach Roloff and another star of Little People, Big World, posted a photo on Aug. 6 to her Instagram that featured the newlyweds as well. It's from their wedding, and also features her husband and their son, Jackson. "Welcome to the madness!" Tori joked in the caption — but Molly and Joel look like they're very happy to be there and don't mind joining in the "madness" of marriage at all.

Finally, a photo that looks like it was taken at dusk of Roloff and Silvius was posted by another brother of Molly's, Jeremy, presumably also on the day of the wedding. And it's simply breathtaking.

The photo showed the bride and groom, hand-in-hand, walking through a field of wildflowers together. It really looks like something that could easily be in a wedding magazine rather than on an Instagram account.

Since Roloff may be a little more private than some other members of her family, the rest of us are lucky to even have these few snapshots of Roloff and Silvius together over the years. Molly Roloff and Joel Silvius appear to be a very happy couple, and hopefully, this is just the start of their own "happily ever after."