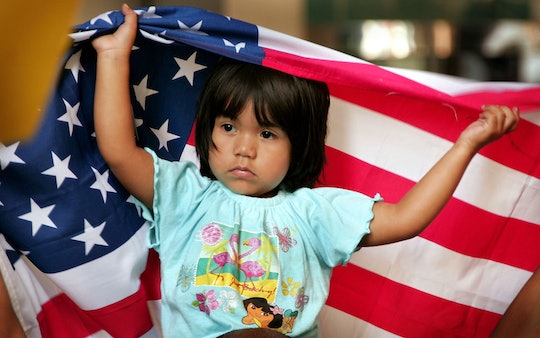 Moving Photos Of Families Hit By The Travel Ban

During that fraught, disturbing first day after President Donald Trump signed an executive order banning travel from seven predominantly Muslim countries, it was clear there would be significant, and immediate, consequences. The order was signed on a Friday night. By Saturday, immigration lawyers flooded airport hallways, and peaceful crowds protested outside. The fight against the ban continues in the country's most powerful courtrooms, and these photos of mothers and children affected by the travel ban are proof positive of why people are trying so hard to stop it.

At the time of the ban's implementation on Jan. 27, its ambiguous language left many (including Customs and Border Control agents) uncertain as to whether green card holders, also known as legal permanent residents, were included. According to reports at multiple news outlets, the Department of Homeland Security (DHS) decided that green card holders were not included; in response, The White House overruled DHS, insisting that legal residents would be admitted on a case by case basis. By Sunday, following widespread and vociferous public outcry, DHS announced that green card holders would still be allowed into the country after all.

(As for visa holders from the seven countries and refugees from all over the world, their inclusion in the ban was maintained. All this could change, of course, if the courts affirm that Trump's order is unconstitutional.)

Meanwhile, devastating stories trickled in of children who had been suddenly, and unexpectedly separated from their parents at airports. At Dallas-Fort Worth Airport, a Sudanese mother — a legal, permanent resident of the United States — was separated from her 11-month-old baby girl, Jude.

According to an account of the incident at Dallas Morning News, the scene at the airport was like a "war room" as lawyers assembled to aid detainees on an emergency, pro bono basis. One of the lawyers attempting to reunite baby Jude with her mother said, "She's a U.S. citizen. A f***ing U.S. citizen." Another attorney, Andrew Strong, wrote in an all-caps Facebook post, "I cannot believe that I am helping draft a restraining order to prevent an 11 month old citizen from deportation." Hours later, both mom and baby were released.

On that very same day, halfway across the country, a visa-holding Somalian woman arrived at Dulles Airport in Virginia with her two U.S. citizen children. The family lived in the United States with their Minnesota-born father. According to ABC News, the family was detained for 20 hours without food, and the mother was handcuffed even when going to the bathroom.

Also at Dulles Airport, a 5-year-old U.S. citizen was separated from his Iranian-born mother and detained, alone, for hours.

Now that the initial chaos of the ban has passed, the stories of children affected are staged all over the world rather than at airports. The photo below is of ridiculously adorable Fetemeh Reshad, a 4-month-old Iranian baby. According to CNN, doctors in Tehran diagnosed Fetemeh with a rare cardiac disease and told her parents that she needed emergency surgery in the United States. The family was screened and traveled to Dubai to obtain their visa, but their appointment was, unfortunately, during the weekend that Trump's ban went into effect. They were sent back to Tehran.

Thanks to the recent orders against the ban in federal courtrooms, Fatemeh and her family have been cleared to travel to Portland, where her uncle and grandparents, all U.S. citizens, live. Doctors at OHSU Children's Hospital in Portland, who will oversee Fetemeh's care, anticipate "a good result," according to CBS News.

And just this week, a family was reunited at Dulles after a visa-holding mother and daughter from Somalia, who were originally expected to arrive the weekend the ban took effect, finally arrived. Here is 3-year-old Zahra Warsma receiving a warm welcome from her grandmother.

Still stuck abroad are the parents of this little guy, 2-year-old Dilbreen Muhsin, who was born in a refugee camp in Iraq after his family's village was attacked by ISIS. Dilbreen and his father Ajeel, facilitated by a U.K.-based charity, obtained a visa for emergency medical care in the United States after Dilbreen suffered serious burns from a fire in his tent at the refugee camp.

In November, Ajeel returned to Iraq because Flosa, Dilbreen's mom, gave birth to a baby boy. The family expected to obtain visas to rejoin Dilbreen, who is staying with a family in Michigan, after the birth, but their plans were derailed first by confusion over their newborn son's status, and then by Trump's travel ban. At present, the family has failed in its efforts to obtain visas for Ajeel, Flosa, and their newborn son. When their son was born in November, they named him "Trump" to show their gratitude to a country that was providing life-saving care to Trump's older brother.

These are just a handful of stories; Many other children and families all over the world have been impacted by this ban, including countless refugee children. The New York Times estimates that 100,000 visas were revoked as a result of the ban; On Saturday, the State Department announced it was reinstating 50,000 revoked visas following a Friday court ruling that halted the ban nationwide. Those whose visas were revoked or stamped, however, are still required to reapply before entering the country, according to The Independent. At present, the executive order's status is in flux, and it's widely anticipated that the immigration ban will land with the Supreme Court sooner rather than later.

For the sake of the families torn asunder by this senseless ban, we can only hope that decency will prevail.