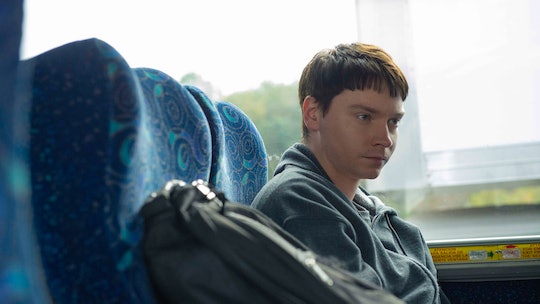 Hulu is finally getting into the dramatized true crime genre, after premium and cable networks' longstanding monopoly on it, with The Act, a limited series based on a 2016 BuzzFeed feature about the murder of Dee Dee Blanchard. The plot to murder her was devised by her daughter Gypsy Rose, a victim of her mother's Munchausen syndrome by proxy (MSBP), and carried out by Gypsy's boyfriend at the time. Much has changed since that report first came out, but photos of Nick Godejohn after The Act have been called "nearly unrecognizable."

In the Hulu limited series, he's played by American Vandal alum Calum Worthy, who very much resembles a younger Godejohn at the time of his arrest. But as a December 2018 20/20 piece noted, by the time Godejohn faced trial in late 2018, he looked much different. Like Gypsy, he appeared to put on a significant amount of weight while in prison, and he had also buzzed his head and shaved his facial hair. The cumulative effect was that Godejohn looked much older and more clean-cut, even though only three years had passed since the 28-year-old's arrest. His trial only lasted four days and the jury deliberated for just two hours before bringing back a verdict of guilty on charges of first-degree murder and armed criminal action.

In the time since the 2015 crime was committed, Gypsy and Godejohn have been at odds, with each claiming the other had a larger share of responsibility in the murder. In the 20/20 interview, Godejohn's first time speaking out, he maintained Gypsy was the mastermind. "I felt horrible about it. When me and her were in the hotel room...she kept on telling me, 'Stop crying, stop crying. There's no reason to cry. It was my idea, it wasn't yours,'" he said. "[Gypsy] comforted me about it. I prayed once I got here. I tried to get her mother's soul to forgive me."

Gypsy, meanwhile, says that, although it was her plan to kill her mother, she also had alternatives in mind to escape her abuse. According to Investigation Discovery, Gypsy testified at Godejohn's trial saying that one possible option she was considering was getting pregnant with his child, which she thought might force Dee Dee to accept him and their relationship. But Godejohn testified that his mother wouldn't allow him to go through with that plan and so they moved onto the murder plot.

Godejohn was ultimately sentenced to life in prison in January of 2019, according to The Springfield News-Leader, while Gypsy is serving out the remainder of her ten-year sentence. Neither of them are particularly thrilled about Hulu's adaptation of their story. Wrote Godejohn in an email to Bustle from prison:

As for the Series the Act I can't comment on it truthfully because I've never seen it and well quite Frankly They never talked to me about making it so they may have slandered My name for it was without My Permission. That's all I can say about that.

Gypsy made a similar statement, according to Bustle, and plans to take legal action against the production. The Act continues to release new episodes Wednesdays on Hulu.