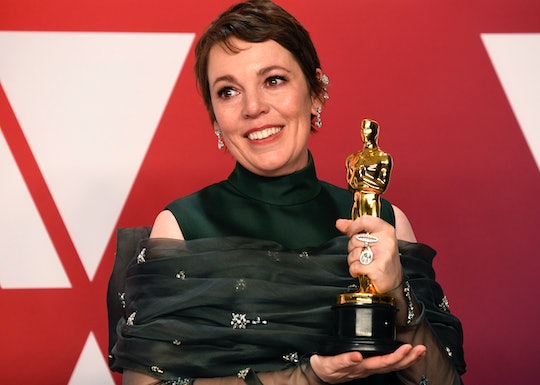 There's No Denying That Olivia Colman Is A Queen

The wait for the third season of The Crown might feel interminable, especially if you're eager to see how the show handles changing the cast. A time jump means all of the characters have aged, so different actors have been brought on board to play them. Oscar winner Olivia Colman replaces Claire Foy as the queen, and these photos of Olivia Colman vs. Queen Elizabeth prove that she was perfectly cast.

According to Deadline, Season 3 won't be available until the latter half of 2019, so there's still some time to go before it premieres on Netflix. Until then, these photos are the only hint you'll have about Colman's performance. While they won't reveal if she's captured the Queen's mannerisms or her distinctive accent, they do illustrate that her look is entirely on-point. In one picture, Colman stands beside Tobias Menzies as the new Prince Philip and they look almost exactly like the real-life pair they're playing. Colman has the Queen's perfectly finger-waved crop and she's wearing a stylish little suit, looking very much like Foy's Queen shifted forward a decade or two.

Colman isn't the spitting image of Queen Elizabeth; it's not like their every facial feature is totally identical. But with the right styling, she's able to embody the Queen enough to be instantly recognizable. You won't mistake her for anyone else.

In addition to taking inspiration directly from the source, Colman looked to her predecessor's performance for tips. Per The National, Colman told the BBC that she was thrilled to be part of The Crown because she'd found the first two seasons so gripping. She was also a big fan of Foy's. "I think Claire Foy is an absolute genius — she's an incredibly hard act to follow," Colman said. "I'm basically going to re-watch every episode and copy her."

Colman is no stranger to playing royalty, having won her Oscar for playing Queen Anne in The Favourite. But Anne was a very different monarch than Elizabeth, and one much less familiar to the public. She lived centuries ago, so there aren't many references around to compare Colman to. Queen Elizabeth is still alive and most of her reign has been captured in photos and video. That actually presented something of a challenge to Colman.

When speaking to Hello! Magazine in Canada, Colman said that since everyone knows what the Queen looks and sounds like, "everyone has an opinion on whether the casting is right." That made it harder, though Colman was still enjoying the opportunity. "I mean, playing different people is what I went into this job for," she said. "That's the whole point, I think, of being an actor, so I'm having a lovely time."

But Colman has no reason to worry about comparisons. She's such a talented actress that her delivering another epic performance is practically a guarantee. Viewers still have to wait and see exactly what Colman's interpretation is like, but it's a good sign that she's able to resemble Queen Elizabeth even in still photographs.