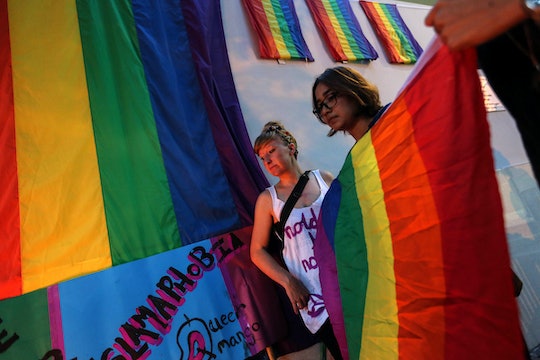 The LGBTQ community, and the country as a whole, was shocked and shaken to hear of the shooting that took place on Sunday. The lone shooter, Omar Mateen, targeted Pulse nightclub, which has been described as a hub and safe space for the gay community in Orlando, Florida. Over the course of the tragic night, 49 people were killed before Mateen was shot by the police in a gunfight. Though this event took place in Florida, people across the nation and the world have voiced their condolences, sadness, and rage on social media, but many have been moved to do more. Communities across the country have been holding vigils and services to honor those who lost their lives at Pulse, and though they may be miles and miles away, they're united in solidarity and compassion. Here are photos of Orlando vigils around the country.

Besides attending a service, there are more ways you can help the victims of the Pulse shooting and their families. Donating blood, becoming a more active ally for the LGBTQ community where you live, donating to groups offering counseling in the Orlando area, and petitioning your local representatives for stricter gun violence prevention measures are all ways to translate sadness into action. To show your support, attend a vigil near you. Searching "Orlando vigil" on Twitter will bring up the most recent updates about events being held across the country.

This photo is from the vigil held yesterday in the Harvey Milk Plaza in San Francisco, California. Hundreds flocked to the site to connect, share their sadness, and stand in solidarity. The location for this vigil has immense historical significance for the queer community in the United States. This square honors one of the most well known proponents of civil rights for the gay community, Harvey Milk, who was assassinated in 1978. Though he was devoting himself to the cause more than 30 years ago now, it's clearer than ever that more work needs to be done.

A vigil was held yesterday at Cal Anderson Park in Seattle, Washington. Mayor Ed Murray addressed the crowd of hundreds of people about his support for the people of Orlando and the LGBTQ community at large. The photographer, Kevin Bennett, captioned this photo with "CommUNITY."

Vigils have not been solely on American soil. There have been a number of services in the United Kingdom, including Manchester, Liverpool, and London, according to ITV. Supporters in Manchester convened at the fire department to pay their respects under a rainbow flag.

Many in Bangkok, Thailand came together to pay their respects before a collection of flags, notes, and candles for the victims of the Orlando shooting. They aimed to show their support for the global LGBTQ community by sending their condolences from afar.

Indy Pride organized a vigil yesterday for the victims of the Pulse shooting in the Old National Centre's Egyptian Room, according to the IndyStar. Hundreds flocked to the gathering to join hands, sing, and show their support.

The Trans Pride organization in Portland, Oregon, organized a vigil on Sunday, and hundreds came together to hear speeches and stories from the LGBTQ community.

In the East Bay, the community came together in Downtown Oakland to rally their support for the victims of the Orlando shootings and their families.

Hundreds of Chicagoans and rainbow flags filled the streets of the Lake View neighborhood yesterday evening. They sang, lit candles, and stood together against violence.

The LGBTQ community and its supporters in New York met at the Stonewall Inn to honor those who lost their lives in Orlando, Florida.

Hundreds met on the lawn of the White House yesterday at sunset to show their outrage and sadness about the events that took place on Sunday morning. They carried signs condemning hate, homophobia, gun violence, and bipartisan politics. The Gay Men's Chorus led the group in songs like "We Shall Overcome."

Though these gatherings were all different, and many, many miles apart, communities everywhere felt the pang of loss and the tragedy of continued discrimination. The vigils are all drawing large crowds, moved by the sudden violence of the Pulse nightclub shooting that shook the gay community. Though this event has been widely politicized and analyzed, it's important to recognize and honor the depth of this loss and the hurt it has caused.