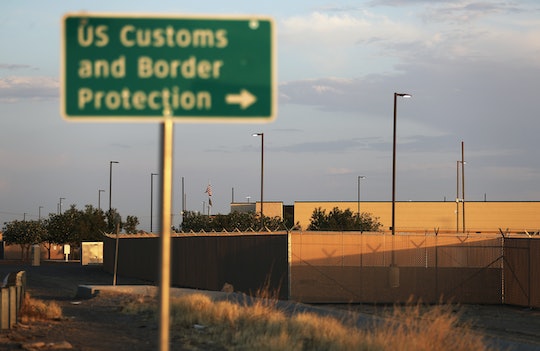 Government investigators have voiced concerns about issues of overcrowding at Border Patrol facilities in Texas' Rio Grande Valley. In a report made public Tuesday, the Department of Homeland Security's Office of Inspector General shared photos of overcrowded migrant detention centers in an effort to illustrate how dire conditions are.

"We are concerned that overcrowding and prolonged detention represent an immediate risk to the health and safety of DHS agents and officers, and to those detained," the report from DHS's Office of Inspector General read.

In an effort to review CBP's compliance to Transport, Escort, Detention and Search (TEDS) standards, government investigators visited five Border Patrol facilities and two ports of entry in the Rio Grande Valley. It was during those visits that investigators observed what their report characterized as the "serious overcrowding and prolonged detention" of children, families, and single adult migrants.

At a Border Patrol's Fort Brown Station, for example, investigators claimed they found 51 adult women being held in a cell with a maximum capacity of 40 male juveniles. Nearby, 71 adult men were found detained in a cell designed to hold, at maximum, 41 adult females, according to their report. At another, unnamed facility, the report claimed investigators had found single adult migrants had been held in "standing room only conditions" for a week.

"In these overcrowded conditions, CBP was unable to meet TEDS standards," the report from the Office of Inspector General concluded. "For example, although TEDS standards require CBP to make a reasonable effort to provide a shower for adults after 72 hours, most single adults had not had a shower in CBP custody despite several being held for as long as a month." At more than one facility, investigators found that detainees were given wet-wipes in place of showers.

In a statement to Romper, a CBP official said the agency "leverages our limited resources to provide the best care possible to those in our custody, especially children." They also claimed that leadership within CBP and DHS has "noted numerous times" that the agency's "short-term holding facilities were not designed to hold vulnerable populations" and that they "urgently need additional humanitarian funding to manage this crisis."

After weeks of largely unsuccessful negotiations, Congress passed an emergency funding bill late last month, which the Associated Press reported would provide $4.5 billion for the care of migrants detained at the border. Of that $1 billion is expected to go toward feeding and sheltering migrants in border patrol facilities while another nearly $3 billion is used to care for unaccompanied migrant children in the custody of the Department of Health and Human Services, the AP reported.

With neither the White House nor Senate Republicans willing to compromise on key provisions, the bill that passed was opposed by four House Democrats: Reps. Alexandria Ocasio-Cortez, Ihan Omar, Ayanna Pressley, and Rashida Tlaib. In a statement shared on Twitter, Ocasio-Cortez called Senate Republicans' refusal to consider input from House Democrats "an abdication of power we should refuse to accept." She warned that "they will keep hurting kids if we do."

This isn't the first time government investigators have reported finding overcrowded conditions and inadequate food and hygiene at migrant detention facilities. Investigators previously blew the whistle on a facility in El Paso, Texas after finding migrants being held for prolonged periods in standing-room only cells during a visit in May, NBC News reported.

According to the Office of Inspector General's report, the crowded conditions have led some senior facility managers to raise security concerns, with one calling the situation "a ticking time bomb." Investigators reported hearing of incidents where detainees had purposefully clogged toilet facilities in order to be released from crowded cells while maintenance was done. In another instance, investigators claimed some detainees had refused to return to cells after being released for cleaning, leading Border Patrol agents to call in special operations team to "demonstrate it was prepared to use force if necessary," the report read.

In a response to the Office of Inspector General, DHS said it was "devoted to the care and processing of the individuals in our custody with the utmost dignity and respect" but characterized the situation at the border as "an acute and worsening crisis."

"Our immigration system is not equipped to accommodate a migration pattern like the one we are experiencing now," their response, which was included in the report's appendix, read. "The current migration flow and the resulting humanitarian crisis are rapidly overwhelming the ability of the Federal Government to respond."

It's unclear exactly how many migrants are in being held in either CBP or U.S. Immigration and Customs Enforcement (ICE) custody. In February, BuzzFeed News reported that ICE claimed to have more than 48,000 migrants in their custody. More recently, numbers gathered by The Atlantic, found ICE had more than 50,000 people detained in its facilities while nearly 20,000 migrants were detained in CBP facilities and more than 11,000 unaccompanied migrant children were in custody of the Department of Health and Human Services.