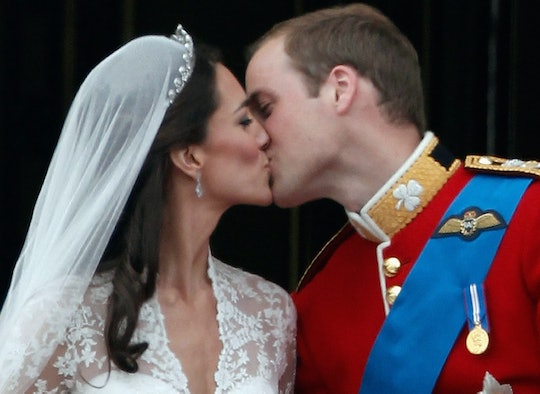 When the Duke and Duchess of Cambridge walked out of St. Mary's Hospital last week after Kate Middleton gave birth to the couple's third child, they looked absolutely overjoyed and totally in love. Sure, it might have had to do with the fact that their son, Prince Louis, was born just hours before. But the fact that they're super strong as a couple didn't hurt their expressions either. In addition to welcoming their third child, they're also celebrating seven years of marriage today, Sunday, April 29. And photos of Prince William and Middleton then vs. now show that the looks that they give one another are unchanging, even as their family continues to grow.

Many little kids dream of having a fairy tale ending — full of tiaras and royalty — but for Middleton, this became a reality. On April 29, 2011, she married her longtime boyfriend, Prince William, aka the person third in line to the royal throne. Millions of people from all over the world watched as Middleton walked down the aisle of Westminster Abbey, in the most incredible dress, to meet her husband.

But people didn't stop watching the couple after the broadcast was over. They've continued to watch them become parents — now to three royally adorable children — and see how their relationship has grown since. But it's still so much fun to look back at photos of the couple from the time they were engaged, to their wedding, until now and see just how far they've come over the years.

When I first met Kate I knew there was something very special about her. I knew there was possibly something that I wanted to explore there. We ended up being friends for a while and that just sort of was a good foundation. Because I genuinely believe now that being friends was a massive advantage. And it just went from there. And over the years, I knew things were getting better and better and we went through a few stumbling blocks as every relationship does, but we really picked ourselves up and carried on and you know.

Their engagement only lasted five months before they got married and their wedding was all that everyone could talk about for years to come (because people are still talking about it). Nearly 2 billion people tuned into the nuptials, according to PopSugar, on what was considered a national day for the United Kingdom and British colonies.

A lot has changed over the course of the past seven years — namely the fact that Prince William and Middleton became parents three times since their wedding day. In 2013, they welcomed their first son, Prince George, and in 2015 they welcomed their second child, Princess Charlotte, according to The Sun. Of course, this past week, Prince Louis joined his siblings as Prince William and Middleton's third child.

In 2015, shortly after the birth of their daughter, according to Hello! Magazine, Prince William praised Middleton for her role as a mother and wife. "It is fantastic having a lovely little family and I am so thrilled," Prince William said. "Catherine has been doing an amazing job as a mother and I'm very proud of her."

Looking at photos of Prince William and Kate Middleton then and now, show that the couple has and will always be #goals, no matter what happens in their lives. Talk about a fairy tale.