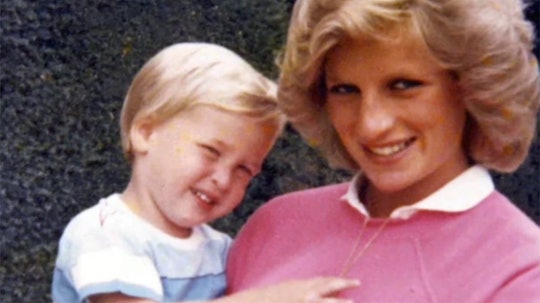 Princess Diana was so many things in her short life — a philanthropist, environmentalist, humanitarian, women's rights advocate, and so much more. But to her boys, she was just mom — loving, encouraging, and compassionate. And these photos of Princess Diana after Prince William's birth paint a beautiful portrait of motherhood.

In the 2017 documentary, Diana: Our Mother, Her Life and Legacy, William sat down for the camera and reminisced about life with his mom. "We felt incredibly loved, Harry and I," Prince William said in the interview, according to CBS News. And to keep Princess Diana's love alive, the Duke of Cambridge often brings up his late mom to his kids, referring to her as Granny Diana, as he noted in the interview.

“It’s hard because obviously Catherine didn’t know her, so she cannot really provide that — that level of detail,” the dad explained, according to People. “So, I do [when] regularly putting George or Charlotte to bed, talk about her and just try and remind them that there are two grandmothers, there were two grandmothers in their lives, and so it’s important that they know who she was and that she existed.”

Princess Diana's memory also lives on photos, all of which paint a stunning portrait of her life as a mother.

Princess Diana was just 21 years old when she gave birth to Prince William. She was young, possibly scared, and also overwhelmed with life in the public eye. In Andrew Morton’s Diana: Her True Story, for instance, she admitted that the pressure of being pregnant in the public eye was almost to much too much for her to bear.

“When we had William, we had to find a date in the diary that suited Charles and his polo,” she said, according to People. “William had to be induced because I couldn’t handle the press pressure any longer, it was becoming unbearable. It was as if everyone was monitoring every day for me.”

Yet, her face in this picture as she presents William for the first time says it all. It's seemingly the look of a new mother completely in love with her new baby.

According to those who knew her, Diana seemed to take to parenting right away. And while there are plenty of candid shots of her as a mom, she sat down for this very formal picture with Prince William just a few weeks postpartum.

Everything about this shot is totally '80s, all the way from the frosted and feathered hair, to the shoulder pads and high neckline. But one thing is seemingly for certain — Diana looks content in her new place as royal mother, with a very tiny Prince William snug in her arms.

She Parented With Love And Admiration

Nearly every picture of Princess Diana and her boys have a similar theme. In many shots, the mom looks on lovingly as Prince William and Prince Harry act like your average kids. They might be at a royal event or a dinner with politicians, but Princess Diana always gave them the chance to be kids first and royals second.

She Encouraged Her Boys To Be Themselves

Princess Diana once said, “I don’t go by a rule because I lead from the heart, not the head," according to Baby Gaga. This was most evident in her relationship with her sons because she let them be themselves, all the way from their likes and dislikes. Even here, pictured at a Heads of State Ceremony in Hyde Park, you can see that Prince William and Prince Harry were all smiles. Prince William laughed with his dad while Prince Harry leaned over his mother to wave to the audience.

She Did Her Best To Protect The Boys

It's safe to say mothers will do anything to protect their children, a sentiment that also applied to Princess Diana. And there's something special about this picture, like the way Princess Diana seems to be holding her two children close within the safety of her own personal space, seemingly using her legs as a shield.

Not to mention, Princess Diana did everything she could to give her children the best life. This is especially true when it came to protecting her children from the ramifications of her high profile divorce from Prince Charles. Of course, it was hard, but according to the Cheat Sheet, Diana knew what it was like to go through a divorce and the possible effect it could have on children.

There's no telling what life would be like today, if Princess Diana was still alive. But chances are she'd be loving her new role as a grandmother, indulging the newest additions to the royal family whenever she got the chance. And I have feeling those photos, similarly to the photos of her after giving birth to Prince William, would be beautiful.