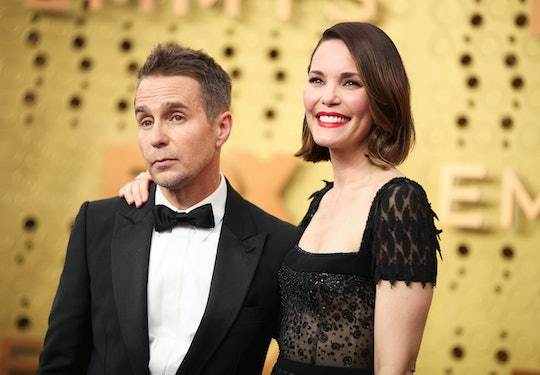 If you tuned in to celebrities arriving at the 2019 Emmy Awards on Sunday evening, you likely had your eyes peeled for your favorite stars and fashion. One couple that frequents such events, however, turned heads ahead of the awards show. That's because photos of Sam Rockwell and Leslie Bibb on the Emmys red carpet are basically the sweetest thing.

On Sept. 22, the Emmy Awards broadcasted live from the Microsoft Theater in Los Angeles. Rockwell was among those in attendance thanks to his nomination for outstanding lead actor in a limited series/movie for his role in Fosse/Verdon. And this time around, the Iron Man actress served as his plus-one. Rockwell and Bibb — who have been dating now for more than a decade, for the record — have walked many a red carpet together as a couple. They both arrived on Sunday wearing black ensembles, according to Us Weekly. And based on the photo evidence, they were also freaking adorable.

Rockwell and Bibb decided to switch things up a bit by dancing together on the red carpet. Because I mean, you can only stand there striking dramatic poses while staring into the flashing cameras for so long, right? (Not that I would know from experience.) Might as well ham it up a bit to keep things interesting. Take a look at their romantic PDA for yourself.

Not only did they share a sweet dance together on Sunday, but Bibb also aided her significant other when it came to answering questions — particularly when he started mis-remembering the first person he called to share the news of his Emmy nomination. "I don't know. I think I was at the gym or something," Rockwell replied to Giuliana Rancic on Sunday.

Bibb then jumped in with, "No, Pedro. Pedro Pascal. He called. Pedro was like, 'You...' — and he used an expletive — 'you got nominated. So I think Pedro actually might've called you and told you."

Although Rockwell still seemed unsure about this version of what went down, he conceded, "Okay, alright. That might be it. Maybe that was it." LOL. I'm not sure if either of them knows for sure what went down. But that's okay, because they still know how to work a red carpet.

This isn't the first time Rockwell and Bibb have attracted attention ahead of an awards show. In January 2018, the pair opened up about how they keep the spark live in their relationship, according to People. “Communication,” Rockwell told E!'s Giuliana Rancic — to which Bibb added, “Good sex!”

“Communication and good sex,” Rockwell reiterated after they both laughed.

“And a healthy sense of humor!" Bibb chimed in once again.

So yeah. If you're ever nominated for an Emmy and you want your significant other to help finish your stories during red carpet interviews — or to switch things up when it comes to posing — definitely have them take notes on Sam Rockwell and Leslie Bibb. Because they've got a nice balance of PDA and humor going on — and they're basically the cutest.