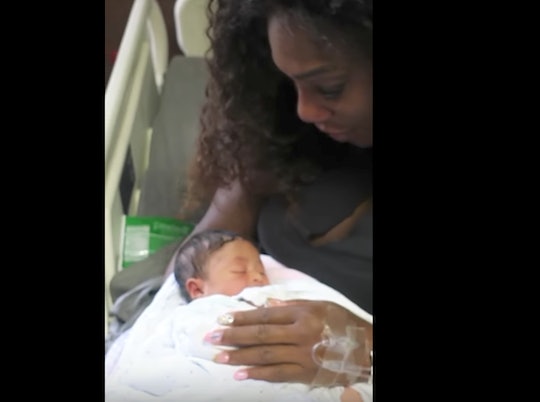 Photos Of Serena Williams Daughter Are So Sweet

Tennis super star Serena Williams and Reddit co-founder Alexis Ohanian's daughter, Alexis Olympia Ohanian Jr., is only a few days old but is probably one of the most perfect babies around. Her mom won a grand slam while she was in utero and her dad used his website to prepare for her birth — basically, this baby has a lot going on and a lot ahead of her. Williams and Ohanian were so talkative about their future child during the past nine months, and because of this, some people (like myself) feel kind of connected to baby Alexis already. This is why I'm dying to see more photos of Serena Williams and Alexis Ohanian's daughter, like ASAP.

As it stands, Williams and Ohanian have only shared limited photos of their daughter so far. On Wednesday morning, the proud parents took to their respective social media accounts to announce Alexis' birth. Williams posted a photo of herself and her beautiful baby girl looking absolutely peaceful together. And Ohanian, in true Reddit spirit, uploaded a photo of himself, Williams, and their daughter, modeled after the Reddit mascot, Snoo.

But until they release more photos, I'll be watching the video they uploaded on Wednesday, documenting the small moments leading up to — and after — Alexis' birth.

In the video, Williams and Ohanian take you on a nine month long journey. You're there with them for all of the exciting moments, and at the end, you can catch a few glimpses of their newborn. From the video, looks like the perfect combination of her mom and dad and could not be any sweeter of a baby. If you don't feel like sitting through the two minute video (which you definitely should) screenshots from the video show Alexis in all of her glory.

Alexis was born on Friday, Sept. 1 but didn't go home for a while. According to USA Today, Williams stated in the video that the two remained in the hospital for six or seven days after due to "a lot of complications." Neither Williams or Ohanian have elaborated on what those complications were. But, like with any other person's pregnancy, people should respect their privacy. This video was a big enough look into their private lives that it should hold over fans for a while.

But I have a feeling that this won't be the last we see of Alexis for a while. Given how excited both Williams and Ohanian were leading up to their daughter's birth (and how much they talked about it), it is only a matter of time until the parents start talking about Alexis and her personality. But Alexis will certainly have a big future ahead of her — with her mom being one of the most popular sports stars of our time and her dad creating one of the most popular forums to currently exist on the internet.

Williams has spoken highly about her daughter's future throughout her pregnancy. In a video interview with Uninterrupted, Williams stated that she hoped her daughter would speak up if facing inequality. "Any child of mine will have a voice," Williams said. "I would love to give my kids what my parents gave me."

And in April, Williams wrote a touching note to her daughter, expressing how much she had given her before she was even born. Williams wrote in the caption of an Instagram post:

You gave me the strength I didn't know I had. You taught me the true meaning of serenity and peace. I can't wait to meet you. I can't wait for you to join the player's box next year.

Alexis is absolutely beautiful and you can tell Williams and Ohanian are so proud of her already. I can not wait to see more photos of their baby girl.