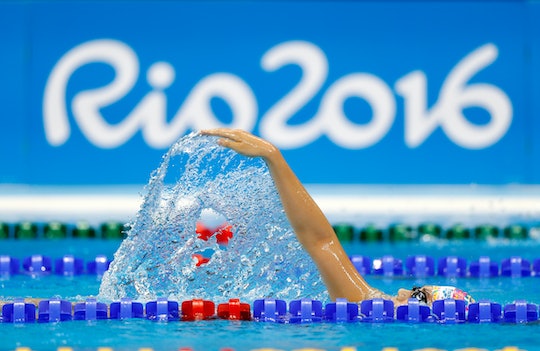 On Friday all eyes will turn toward Rio de Janeiro, Brazil, for the opening ceremony of the 2016 Summer Games. And one of the most exciting moments for many American Olympic fans will be the big reveal of Team USA's Rio Olympic outfits. Just like years past, the American athletes will be wearing uniforms designed by iconic American fashion label Ralph Lauren.

According to the Pittsburgh Post-Gazette, Team USA isn't the only country sending its Olympic hopefuls to compete in couture. Great Britain will wear Stella McCartney, Cuba will rock Christian Louboutin, and the French team will go for the gator in Lacoste.

But Ralph Lauren is pulling out all the stops for this year's Opening Ceremony, outfitting the flag bearers in jackets the brand developed with Silicon Valley, which are being billed as "the ultimate integration of innovation, fashion, and technology," according to the Post-Gazette. Panels in the jackets will reportedly light up design details including the letters "USA."

“The feeling of watching Team USA’s topnotch athletes step onto one of the largest stages in the world wearing Polo Ralph Lauren is pretty hard to beat,” David Lauren, Ralph Lauren executive vice president and son of the designer, told the Post-Gazette. “As a company, it’s an honor to be able to do our part in supporting the team and its future.”

But many have said the stripes on the outfits make athletes look like they're wearing the Russian flag.

As for the athletic wear for Team USA, that's all being designed by Nike. The iridescent shell of the Brazilian beetle was the inspiration for the uniforms, Michelle Miller, Nike's Olympic senior concept director, told Elite Daily.

Cute hats, but save your energy.

But the track and field uniforms are fire.

The color and removable sleeves on the women's gear are pretty awesome.

And here's a look at the racing suits for Team USA swimming.

No doubt once again Team USA will be sending some of the best outfitted athletes to the Olympic Games. (Even if they kind of look a little like they just got off a boat party for a Russian prep school.) You've got to look your best to perform your best, right?