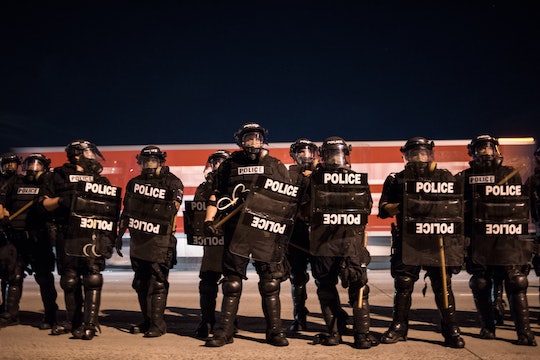 Calls for peace and restraint went ignored in Charlotte, North Carolina, Tuesday after the police shooting death of 43-year-old Keith Lamont Scott resulted in protests and riots that blocked traffic on the interstate and resulted in numerous injuries and arrests. Photos of the Charlotte protests show the escalating violence of the protests, ending with some protesters looting trucks and attempting to break into a Walmart, according to ABC News. Scott was fatally shot by police outside an apartment complex in Charlotte Tuesday afternoon, after they alleged he exited his vehicle holding a firearm. His family has disputed that report, claiming that he wasn't armed, and had only been reading a book while waiting to pick his son up from school.

According to CNN, police arrived at the The Village at College Downs apartment complex Tuesday in search of a different man with an outstanding warrant when they saw Scott in his car. After approaching him, police claimed he was armed and "posed an imminent deadly threat" to the officers on the scene. Following the shooting, police said they recovered Scott's gun. The officer who shot Scott, who is also African-American, has been placed on administrative leave, per standard procedure.

Anger over the shooting grew as news of Scott's death spread, and according to NPR, protests initially started out peacefully. But as the evening wore on, the growing crowds started to turn violent, and police arrived in riot gear, firing rounds of tear gas at the protesters, who "were on their knees and shouting and saying, 'Black lives matter.'" and "hands up, don't shoot." Early Wednesday morning, protesters held up traffic on Interstate 85, and according to CNN, then began removing items from the back of stopped trucks, lighting them on fire. Others were seen smashing windows and the windshield of a police van, and according to NPR, a television news crew also reported that protesters were rocking their van, which had been parked near the apartment complex.

According to CNN, the police department said at least a dozen officers were injured in the protests, at least one of whom was hit in the fact with a rock. Approximately seven others individuals were hospitalized, and five protesters were arrested.

According to The Washington Post, a woman who says she was Scott's daughter claimed that Scott was unarmed and also disabled. She also alleged that her father was Tasered and shot four times by police. Charlotte Mayor Jennifer Robinson has called for a "full investigation" into the shooting, though many in Charlotte were outraged at yet another fatal shooting of a black man by police — particularly that it occurred so soon after Ahmad Khan Rahami, the suspect arrested in connection to the bombings that occurred over the weekend in New York City and New Jersey, was apprehended alive by police after a manhunt and shoot out. Protester Nichelle Dunlap told CNN,

Something has to be done. ... (T)here was a terrorist in New Jersey, New York. He was taken alive. They said they want to question him. So because you wanted to question him, does his life mean more than our black men across the nation? It doesn't make any sense.

Scott is one of approximately 163 black men who have been fatally shot by police this year, according to The Washington Post.