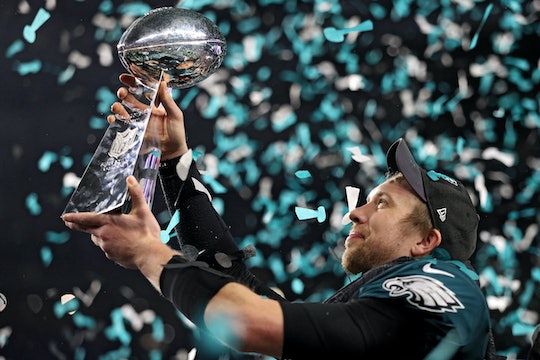 Super Bowl rings have never been what you'd call understated. But in recent years, the designs have intentionally gotten gaudier and gaudier, as each winning team tries to outdo the previous champions. So you might expect that when Philadelphia finally got their chance, they'd come up with a real eyesore of a status symbol, but photos of the Eagles' Super Bowl rings show that at least someone on that design team tried their best to come up with a more tasteful look than what we've grown accustomed to seeing.

That's not to say that the rings aren't still huge and extravagant — that's a given — but you probably won't get a migraine looking at one, even in direct sunlight. Team owner Jeffrey Lurie told The Philadelphia Inquirer that he wanted more "elegant" rings, but the players insisted, "the bigger and the blingier, the better, and that's what we did." Apparently Lurie has never taken a look at Tom Brady's hand, which is understandable, honestly, because the Patriots' rings have the uncanny ability to turn all five of the players' fingers into symbolic middle ones. The Eagles' rings are blingy as hell, but in the realm of sports championship jewelry, they're absolutely elegant.

According to the team's website, the rings are comprised of 10-karat white gold, with a total of 219 diamonds and 17 "rare green sapphires." The 13 diamonds at the base of the Lombardi Trophy represent the 13 games the team won during 2017's regular season, and the top features three more in honor of their postseason victories. The bezel of the ring contains 127 diamonds, the sum of the jersey numbers of the three players involved in the winning play: Corey Clement (30), Trey Burton (88), and Nick Foles (9). Four green sapphires on the sides honor the team's four NFL championships (three of which were prior to 1967, when the Super Bowl took place), according to the team's website.

In addition to the gems, there are additional symbolic features: the inside features an engraving of a German Shepard's face, a nod to when players Chris Long and Lane Johnson wore dog masks to the Eagles-Falcons playoff game to poke fun at their "underdog" status, according to NBC Sports. The side of the ring bears the words "We all we got, we all we need" and "family," direct quotes from a stirring (and expletive-laced) speech delivered by team leader Malcolm Jenkins following the team's NFC East winning game in December.

It's unknown exactly how much the rings cost, but you can make a rough estimate based on past rings, most of which were created by the same manufacturer. The Patriots Super Bowl XLIX ring, featuring 205 diamonds, was estimated to cost about $36,500, the most expensive Super Bowl ring ever made at the time, according to CBS Sports. The next year, the Bronco's commissioned a ring containing 212 diamonds, which was estimated to be worth over $37,000. But the following year, the Pats took it to the extreme, ordering a design with 283 diamonds to represent the 28-3 score the Pats had to overcome to win Super Bowl LI. The price is undisclosed, but with just 236 total gems, it's unlikely the Eagles beat that record.

Fans who want to commemorate the Eagles' historic win (or nab an extremely expensive prop for a Halloween costume) can purchase replicas of the Super Bowl LII ring from Josten's, the same company that made the real ones. There are 127 limited edition 10-karat white gold rings available, boasting 2.5 carats of diamonds and 4 carats of sapphires for the very reasonable price of $11,127.00. If you'd rather buy a car with that kind of scratch, you can pick up a pared down version (sans sapphires) for $4,999, or a sterling silver and cubic zirconia replica for $649. And ladies, Josten's didn't forget about you! You can pick up a daintier take on the Eagles' ring for between $449 and $1979, depending on your metal and stone choices. Now that's a statement piece.