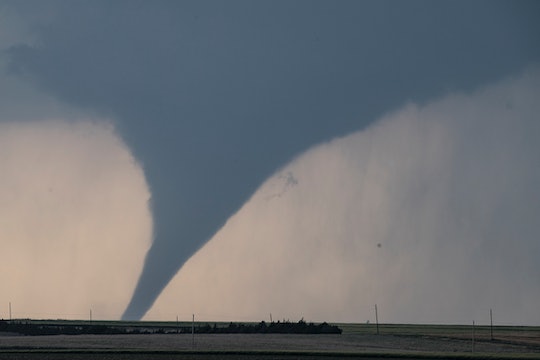 On Wednesday afternoon, a tornado warning was put in place for Kokomo, Indiana, advising all residents to stay indoors. Of course, some brave souls still felt the need to document the weather regardless, and those photos of the Kokomo tornado showed the full extent of the damage to the town. Most of the images are insane, especially if you've never been in an area prone to such extreme weather. In one video, taken from inside what appears to be a restaurant, viewers can see the rain and the wind gusts outside. Suddenly, the tornado completely demolishes a Starbucks across the street. It's absolutely terrifying.

According to The Weather Channel, the Kokomo tornado hit at exactly 3:24 p.m. local time and started to move east at about 30 miles per hour. Another tornado was was spotted west of Crawfordville, and a third one just east of Indianapolis was also reported, according to CNN

There were also homes in the area that were reportedly damaged but, thankfully, no casualties have been reported yet. Even inside the demolished Starbucks from the aforementioned video, the patrons were reportedly trapped but not hurt, according to one witness. The man told WTHR-TV, a local affiliate, that "it was hellish" nonetheless. Markland Mall, in the same area was also "significantly damaged."

Altogether, the images on Twitter and reports of the damage left in the storm's wake are pretty harrowing:

There were other shots of the beastly storm itself, too:

Most people who live in tornado prone area know what to do, but just in case you're a tourist in Indiana (hey, it could happen), staying inside is always the first priority. The next step is to get as far underground as one can, like in a basement or storm cellar. Once inside, The Weather Channel advises, stay as far away from windows as humanly possible because they'll be the first thing to shatter. The Weather Channel even suggests putting on your shoes (in case you have to run) and getting a helmet.

Anyone caught on the road taking pictures and video (tsk, tsk, tweeps) is advised to get out of the car. But despite what your base instincts might tell you, you should never seek shelter under an overpass, as the structure will only act as a wind tunnel. It's best to get far away from the car, since it could fly, and find a ditch or low area and wait for it to pass. (Are you stressed out enough yet?)

Unfortunately, no one really knows how to predict exactly where a tornado will drop and when it will peter out. "We don't understand how tornadoes die," Harold Brooks, a research meteorologist with the National Oceanic and Atmospheric Administration told National Geographic in May. "Eventually the air gets too cold and it chokes off the inflow of new air into the storm, but we don't know the details."

For now, try to stay safe and away from the winds. And for god's sake, put that phone away and leave things up to the experts.