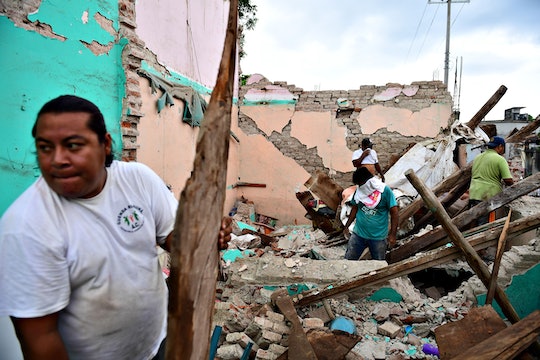 Photos Of The Mexico Earthquake Damage Are Totally Heartbreaking

A massive 7.1-magnitude earthquake rocked central Mexico Tuesday, toppling buildings and leaving more than 200 people dead, according to CNN. As rescuers continued to search for survivors through the night, the photos of the Mexico earthquake damage that have emerged show just how intense and scary it really was, and make it pretty clear that it will be a long time before Mexico City and its surrounding areas will truly be able to recover.

According to ABC News, Tuesday's quake actually hit on the anniversary of the 1985 Mexico City earthquake — a devastating 8.0-magnitude earthquake that was the worst to ever strike the Mexican capital. What's more? When the earthquake hit Mexico City Tuesday, an earthquake drill was literally being held, which honestly must have been beyond horrifying. And while the most recent earthquake may have been milder in magnitude than its predecessor, it still wrecked unimaginable damage: among those pronounced dead, at least 21 were students and staff at the Enrique Rebsámen school, which collapsed in the quake, and nearly 40 more people are still considered missing at that site alone, according to The Guardian.

As awful as Tuesday's earthquake was though, it's actually the second time this month that the country was hit by a devastating temblor. Only 11 days earlier, a huge 8.1-magnitude quake hit Mexico's southern Pacific coast, leaving more than 60 people dead, according to CNN.

Emergency workers, military personnel, and volunteers have been working tirelessly in an attempt to rescue survivors, according to BBC News, and at the Enrique Rébsamen school, three people were said to have been pulled alive from the rubble Tuesday night, including a child who was "saved after oxygen was supplied through a tube." Although many of the photos and videos emerging on social media following the disaster depict the horrific damage, the rescue is a testament to another reality that is being widely shared: the hard work and solidarity being showed by the people in Mexico City and the surrounding areas as they attempt to help in any way possible.

On Twitter, many people offered up footage of rescue workers and volunteers helping to sift through the debris:

And a widely-circulated video also showed a dog being rescued from the rubble while the crowd cheered:

Others took to social media to share photos and video that illustrated just how devastating the earthquake really was:

Including some beyond heart-wrenching videos showing buildings literally collapsing right in front of the people who were filming:

Earthquakes aren't exactly an anomaly in Mexico, and the damage done by the massive 1985 earthquake led to many important improvements in safety laws, infrastructure and disaster preparation (hence the city-wide drills), according to CNN. The good news is that's generally meant that subsequent earthquakes have been less damaging than they may have otherwise been. But according to The Guardian, Tuesday's quake seemed to strike without warning, leaving Mexico City much more vulnerable to the devastation that ensued.

It's pretty clear that Mexico will be in need of extensive relief and assistance going forward as it continues to search for any remaining survivors, and begin the process of rebuilding. For anyone looking to donate money to the effort, organizations like UNICEF Mexico, the Mexican Red Cross and Brigada de Rescate Topos, may be good places to start, according to The Huffington Post, while a number of other organizations — Oxfam Mexico, Save the Children Mexico, La Universidad Nacional Autónoma de México and Project Paz to name a few — are also accepting much-needed relief supplies, like "water, batteries, food, and canned goods."

But as much as it's incredibly important that we help out in any way possible, one thing also seems pretty clear in the wake of the disaster: the people of Mexico City have definitely come together, and are doing whatever they can to overcome. And as unimaginably difficult as it must be right now, the images emerging are pretty awe-inspiring to see, and are something we shouldn't forget.