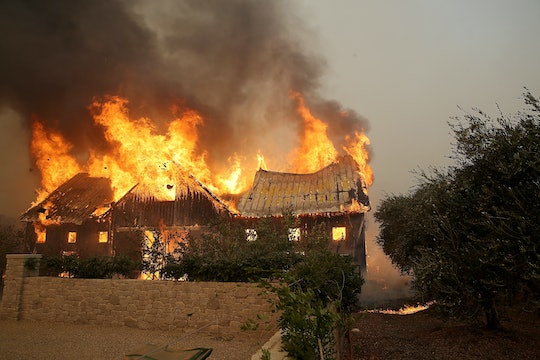 These Photos Of The Napa & Sonoma County Wildfires Are Terrifying

While the Southeastern United States deals with the remnants of Hurricane Nate and Colorado braces for their first winter storm of the season, much of Northern California is burning amidst a devastating wildfire season. Sonoma and Napa Counties are experiencing several life-threatening fires, forcing Gov. Jerry Brown to declare a state of emergency, as well as order the evacuation of thousands of people. Photos of the Napa and Sonoma County wildfires are especially terrifying, showing massive, sometimes fast-moving fires that seem to rage on without any sign of slowing down.

California typically experiences two fire seasons, the first occurring in the early summer. During the fall, the hot, dry Santa Ana winds that blow across the Golden State are the main factor that can transform even the smallest brush fire into a conflagration that can consume whole communities and buildings. Gov. Brown issued a state of emergency for Napa, Sonoma, and Yuba Counties. This particular region of California is known as "Wine Country," and these rapidly-moving fires have threatened homes, businesses, livelihoods — and even lives.

According to The San Francisco Chronicle, at least one person has been killed in the Napa wildfires and more than 1,500 buildings completely destroyed. Two hospitals in Santa Rosa, about 40 miles northwest of Napa, have had to close and evacuated because of fires encroaching dangerously close to each. On social media, photos and videos of the Napa and Sonoma wildfires are harrowing, to say the least.

In Napa Valley, several wineries and vineyards have been threatened by a fire that's been called the Atlas fire by officials, so named for where the fire began on nearby Atlas Peak. According to Wine Spectator, Signorello Estate Winery has been completely destroyed by the Napa wildfire. NBC News showed footage of the William Hill Estate Winery being consumed by flames, according to The Mercury News. The newspaper also reported that residents in Glen Ellen and Kenwood have said the Chateau St. Jean winery was also destroyed. On social media, photos of Stag's Leap Winery show the building has been lost to the Napa fires as well.

Meanwhile in Sonoma County, the raging Tubbs fire has rapidly spread from 200 acres to more than 20,000 acres. Both the Sutter Santa Rosa Regional Hospital and Kaiser's Santa Rosa Medical Center had to be evacuated and closed on Sunday and Monday. In total, more than 200 patients were evacuated from the two medical centers because of the fire threat, according to The Mercury News.

According to CNN, the wildfires in Northern California have consumed more than 57,000 acres, spread across eight different counties. More than 20,000 people have been evacuated from the affected areas, and more than 100 people have been treated at area hospitals for fire-related injuries and illnesses, including burns, smoke inhalation, and shortness of breath. The scale of the fires is almost hard to fathom, but this satellite view of the region puts things into frightening perspective.

Dry conditions, low humidity, and the Santa Ana winds have all contributed to an especially monstrous fire season in Northern California — when October is already the busiest month for wildfires, according to authorities. The National Weather Service has forecasted that wind gusts will ease over Monday night into Tuesday, but the "winds and the fire weather threat will decrease Tuesday in the north, but a threat will remain in Southern California."