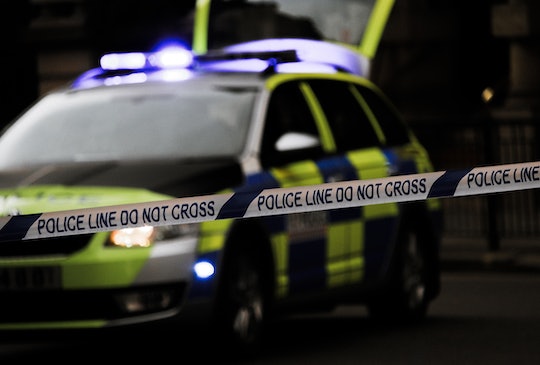 Photos Of The Quebec Mosque Scene Are Terrifying

Canadian Prime Minister Justin Trudeau made headlines Friday after tweeting his support for refugees and cultural diversity in light of President Trump's highly controversial ban prohibiting those from certain Muslim-majority countries from entering the United States. But Trudeau's warm welcome was challenged Sunday night, when six people were killed and eight more wounded in a shooting inside Quebec City mosque, Le Centre Culturel Islamique de Québec, according to CBC News. While more details have yet to emerge, photos of the Quebec mosque shooting are a reminder of the ongoing discrimination and violence many local Muslims communities are facing.

Two men have since been arrested in connection with the shooting, which Trudeau has since denounced in a statement as a "terrorist attack," and which Quebec Premier Philippe Couillard called a "murderous act directed at a specific community." Although the identity of the suspects have not been officially released, several local outlets have reported that they were students at the Université Laval in Quebec City and that they allegedly opened fire on worshippers while wearing ski masks, according to The Toronto Star. Quebec City police spokesperson Étienne Doyon told reporters that both men are now facing murder charges, and Quebec’s Public Safety Minister Martin Coiteux said that local, provincial and federal police were all deployed in accordance with Canada's "official terrorism protocol," according to The Toronto Star.

Although the shooting was a shocking act of violence against the mosque, it wasn't actually the first time Le Centre Culturel Islamique de Québec has been targeted. According to The Montreal Gazette, in June worshippers found a severed pig's head left on the doorstep of the mosque during the holy month of Ramadan, along with a card that said “bonne appétit.” At the time, Doyon told reporters the the incident was being taken seriously, and that “it’s very important for people to be able to practice their religion freely."

In the shooting's aftermath, Quebec City Mayor Régis Labeaume was visibly emotional as he offered his support to the city's Muslim residents, according to CBC News, and said, "to the Muslim community, our neighbors, our co-citizens, who count on our support and solidarity, I want to say, 'We love you.'" Premier Couillard echoed his message in his own statement and told Quebec Muslims, "We are with you. You are at home. And you are welcome at home."

In an official statement released Sunday evening, Trudeau offered condolences to the victims' families while also reinforcing his earlier message about inclusion and solidarity:

While authorities are still investigating and details continue to be confirmed, it is heart-wrenching to see such senseless violence. Diversity is our strength, and religious tolerance is a value that we, as Canadians, hold dear.

New York City Mayor Bill de Blasio — who has condemned Trump's so-called Muslim ban — offered his support in a tweet Sunday night, and wrote that the two countries "must stand together." French President Francois Hollande also condemned the attack and said in a statement that "it was the Quebecois spirit of peace and openness that the terrorists wanted to harm',' according to The Huffington Post. A spokesperson for German Chancellor Angela Merkel told reporters that Merkel also condemned the "despicable" attack, according to the Associated Press, but added that unity, not division, needed to be the priority going forward:

If the killers intended to set people of different faiths against each other or to divide them, they must not and will not succeed in that. We stand in mourning beside the Muslim community in Quebec.

Unfortunately though, that's not exactly what appears to be happening — at least not on social media. While messages of support, shock, and sadness have been pouring in for the people of Quebec City, many have also used the incident — along with reports from a witness that the gunmen may have shouted "Allahu akbar" before opening fire, according to CBC News — as proof that Trump's ban on Muslims is warranted.

It's clear though that, regardless of any other details or opinions, what is most important is remembering the fact that six innocent people are now dead, and countless others, including a number of children who were also at the mosque at the time of the shooting, have been left traumatized. In a translated message on its Facebook page, Le Centre Culturel Islamique de Québec wrote, “All our thoughts go to the children, to whom we must tell about the death of their fathers. That Allah provides them patience and endurance." And no matter where you stand politically, that's a heartbreaking message that shouldn't be forgotten.