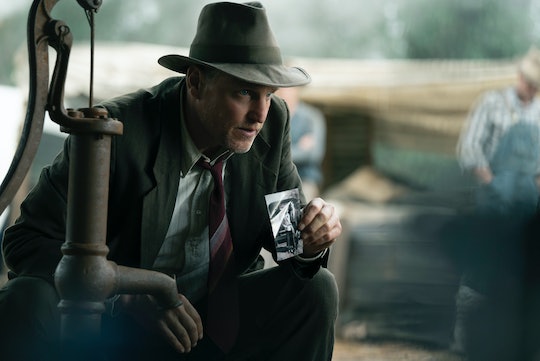 Long before and for years after Texas rangers Frank Hamer and Maney Gault took down famous outlaws Bonnie and Clyde, they were close friends. As viewers have seen in Netflix’s The Highwaymen, they shared an interest in shooting, playing cards, and taking down bad guys together. Gault was known for keeping to himself and both men rarely spoke about their famous case after it was over. And the photos of the real Maney Gault from The Highwaymen show just how much he preferred to keep to himself. There aren't that many photos of him in circulation today and you will often see the same ones of Gault in a bowler hat with a pensive expression on his face or no expression at all.

Gault might not have ever made the career change from working in a sawmill to becoming a Texas ranger if he had not lived next door to Hamer in Austin, Texas. According to True West magazine, Hamer used Gault for sting operations as an undercover informant well before Gault became a Texas ranger, but obviously Hamer could see something special in him. And eventually, the two would become famous around the country for leading the team who took down Bonnie and Clyde and ended their crime spree.

After the famous case ended with a shootout, Gault and Hamer were declared heroes by newspapers everywhere, but more often than not, they declined interviews and chose not to speak on the subject alone or together. True West magazine wrote that one reporter described Gault specifically as "cold-eyed, mysterious, and he doesn’t talk." Given the fact that there are few photos around of the real life Gault from The Highwaymen, that might be a fair assessment. But while he might have been a man of few words, he obviously left his mark as a man of the law.

John Fusco, who wrote The Highwaymen, tweeted a colorized photo of Gault and Hamer together outside of a barn with what is presumably the car they used to follow Bonnie and Clyde across the country. They spent hours every day driving and ate their meals and generally lived out of the car until they finally led the team that would bring down the infamous criminals. In the photo, Gault has the same no-nonsense look on his face that tells me he wouldn't let anyone slide with a warning if he pulled them over for speeding.

There’s another photo of the real Gault that shows the subject of The Highwaymen with his horse when he was a Texas ranger. Although there were plenty of cars on the road back then, it's possible that he rode on horseback at times, at least during the start of his career, to catch criminals. It definitely gives you an "old west" sort of vibe, and once again, Gault has the best poker face ever.

The Highwaymen details the journey of the detectives who took down Bonnie and Clyde, but it also shows who these men were, despite being somewhat mysterious to the outside world. Even today, Gault is known as someone who spoke very little and his pictures show a stoic ranger who likely kept things as professional as possible when he was on duty.

Obviously his closest confidant, Hamer, was the exception to Gault’s stone cold demeanor, but it was probably necessary in his line of work as a ranger and highway patrolman. For the most part, though, The Highwaymen gets their friendship right and despite Gault being a mystery in real life, there are some photos out there that chronicle his career in law enforcement.