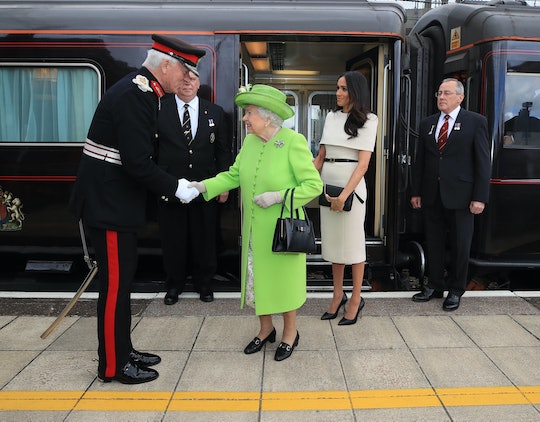 Here's a not-so-secret secret about me: I loathe the New York City subway system. Growing up in Brooklyn, the train was the way I got around. It took me to school in Manhattan. It took me to my best friend's apartment in the Bronx. It even took me to *shudder* New Jersey. But, despite all the distance that's traversed, riding the subway is a wretched experience — it's broken, dirty, unreliable, and too expensive. So, needless to say, when I look at photos of the royal train, I am immediately envious. And, honestly, how could I not be.

The royal train is Queen Elizabeth's preferred means of transportation, often used while traveling around the United Kingdom by both her majesty and her royal family members, according to The Sun. And this week, Meghan Markle, the Duchess of Sussex, had a chance to join the Queen on the centuries-old luxury locomotive for an overnight trip — reportedly an honor not even her husband, Prince Harry, brother-in-law Prince William, or sister-in-law, Kate Middleton, has received, The Sun reported. Looking at images of the nine-carriage royal train, I could only imagine that the ride was anything but boring.

The Queen and the Duchess of Sussex rode the royal train from London to Runcorn, a town in Cheshire county, where they arrived Thursday morning, according to The Daily Mail. Queen Elizabeth II invited her granddaughter-in-law to join her for a day of royal engagements, including the official opening of the Mersey Gateway Bridge in the town of Widnes, and the Storyhouse cultural center in Chester, The Daily Mail reported. This is the first public engagement the 36-year-old Markle is attending without her husband, Prince Harry.

I won't lie: If I had to the royal train everyday in order to get around New York City, I would probably still live there, astronomically high cost-of-living be damned. I mean, just take a look inside of the locomotive. The nine-carriage train includes a 12-seater dining room, a kitchen, private carriages for each royal family member, smoking rooms, a full-size bathroom, an executive suite for official business, and so much more, according to The Sun. And more than 30 people can ride safely on the prestigious royal train, which means not only can the Queen and her family fit, but also their staff entourage, The Daily Express reported.

I mean, I love my new apartment and its cozy feel. But I would also gladly move into this locomotive and never leave.

Of course, the royal train is not without controversy. In recent years, the luxury private train has come under fire for its cost to citizens. Each year, on average, the royal train costs more than a million in U.S. dollars a year to run, according to The Daily Express. (That translates to roughly $70 per mile.)

In order to shrink those yearly locomotive expenses, only the Queen and Duke of Edinburgh, or the Prince of Wales and the Duchess of Cornwall, are allowed to use the train, The Daily Express reported. Overall, during the 2016-2017 year, travel costs for the British royal family reached nearly $6 million; that price tag also includes flights, which are "one of the priciest parts of the final amount," according to The Daily Express.

Personally, I couldn't even imagine spending more than a grand on a vacation, so millions of dollars shelled out for trips is pretty wild to me. Still, again, if I had the royal train at my disposable, I would ride it every second of the day, even if I am just doing grocery shopping.