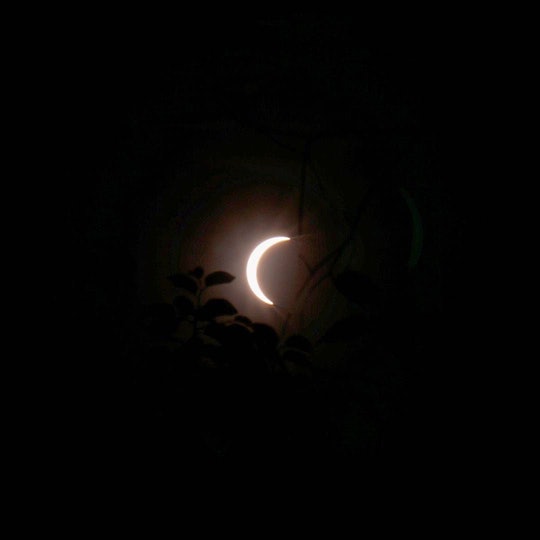 Photos Of The Solar Eclipse Are All Over Social Media, & They Are Pretty Impressive

Even though Wednesday's solar eclipse may have only been visible in parts of Southeast Asia and the Pacific Ocean, photos of the solar eclipse are all over social media today, giving the rest of the world the chance to witness the event, according to BBC News. Twitter and Instagram users shared photos from places where some form of the eclipse could be seen — like Indonesia, Japan, China, the Phillipines, and Hawaii. But although those in Central Borneo and Sumatra likely had the best view, USA Today noted that most of the eclipse actually took place over the open Pacific Ocean (go figure!).

It turns out, though, that the best place for eclipse viewing wasn't even on the ground: according to ABC News, when American Museum of Natural History associate astronomer Joe Rao found out that an Alaska Airlines flight from Anchorage to Honolulu was set to fly through the path of the eclipse, he convinced the airline to delay the flight by 25 minutes so that passengers (including himself and a number of other astronomers interested in the event) could witness the eclipse from above the clouds. Flight delays might be the absolute worst, but "we've pushed back the flight so you can see an eclipse from the sky" is a pretty good excuse.

According to the Guardian, the solar eclipse left Indonesia in a state of darkness for about four minutes while the moon passed in front of the sun, during which time people, "prayed and cheered." Indonesian president Joko Widodo even tweeted a photo of the eclipse from his presidential residence, Bogor Palace, saying, according to the Wall Street Journal,

Watching total solar eclipse from Bogor Palace. This is a sign of the power, the greatness of Allah.

But Widodo wasn't the only one to share photos of the eclipse — plenty of others did too, and the results are seriously cool:

Wondering when the next chance might be to see something like this in North America? According to Vox, a solar eclipse will pass over the United States on August 21, 2017, with a partial eclipse seen in Canada and Mexico.