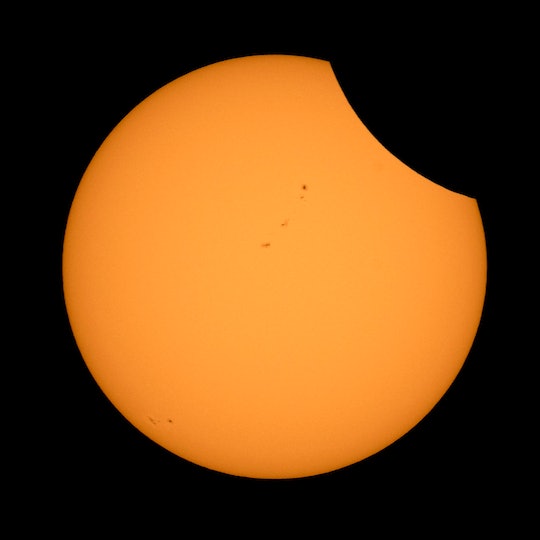 Stunning Photos Of The 2017 Solar Eclipse

Across the United States, people have been excitedly awaiting Monday's total solar eclipse. But for all those who are stuck indoors during the rare celestial show, or who didn't manage to get special eclipse glasses and would rather not risk permanent eye damage, the internet has got photos of the solar eclipse galore. And, yes, the pictures are stunning.

So why exactly are people freaking out, and flocking to fields with lawn chairs and homemade pinhole projectors? In a total solar eclipse, the moon passes between the sun and the Earth, temporarily blocking out our view of the sun and turning daytime into nighttime. One minute, it's just a normal afternoon. The next, the world goes dark, the stars come out, and the crickets start chirping. And then just a couple minutes later, all is back to normal. While eclipses happen frequently enough, this one is particularly huge for the United States, because it's the first total solar eclipse to be seen from the United States mainland since 1979, and the first one to fall only over the United States since the country was founded.

The "path of totality," or the part of the country that is covered directly by the moon's shadow, sweeps across the United States from Oregon to South Carolina. On Monday, eager viewers flocked to various locations along the path, with their cameras at the ready. And when the fast-moving eclipse started in Oregon, the amazing photos hit Twitter in droves.

According to CBS This Morning, almost 100,000 people came to the small town of Madras, Oregon (typical population: 6,200) to view the start of the totality. From the sounds of the onlookers' cheers in the below footage, it seems they found it well worth their while.

But even in the parts of the country that did not lie in the path of totality, people turned out by the thousands to see the partial obscuring of the sun, which was pretty awe-inspiring in its own right.

And while pictures of the totality and the partial eclipse were amazing in and of themselves, there was also something beautiful (and occasionally hilarious) in seeing the way that people prepared for the rare event. This kind of palpable excitement, the uncomplicated giddiness in greeting a scientific phenomenon, has been all too rare in recent months. According to Good Morning America, one couple even arranged their wedding so that they could say their vows when the total eclipse fell over Missouri.

The United States won't see another total eclipse until 2024. So if you missed it this time around, gorge yourself on the wealth of photos. (For some more jaw-dropping images, head on over to NASA's official eclipse photo collection.) Then, start figuring out your eclipse plan for the next time around.