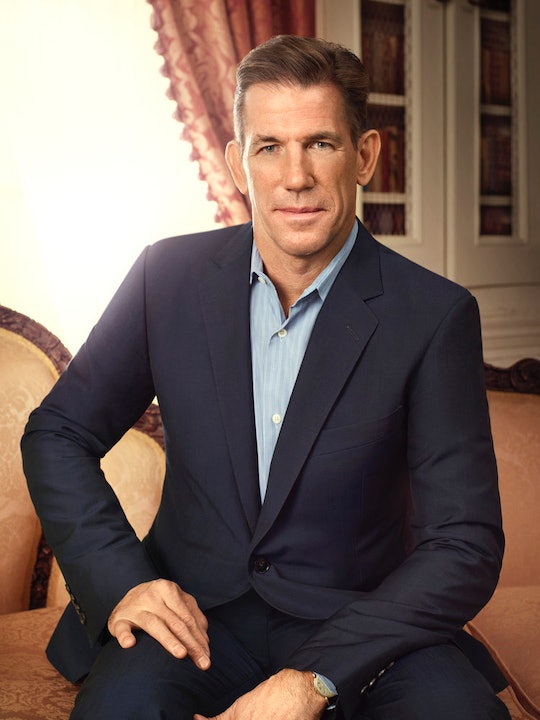 A difficult (and still ongoing) custody battle left Thomas Ravenel with full custody of the children he shares with co-star and ex Kathryn Dennis, and Southern Charm has made the most of his transition from man-about-town to dad-about-house. Thomas' relationship with his kids' mother might be far from ideal, but he seems dedicated to raising his family and trying to do what's best for them. His social media is practically nothing but pictures of his 3-year-old daughter Kensie and his 18-month-old son Saint. These photos of Thomas Ravenel and his kids show how close they really are.

But that doesn't mean the situation is without drama — far from it, actually. In addition to the continuing custody issues, some fans raised eyebrows when Thomas announced that his children don't actually live in his house. Instead, they live in the guest house out back because, in Thomas' words, kids are "messy and destructive" and he didn't want to worry about them destroying his $30,000 rug with spit up. Of course, the guest house is big enough to count as enough of a home for most people and Thomas' was quick to try and explain himself further in an interview with People.

Thomas told People that he was acting on the advice of his nanny, "who said that this would be the most appropriate place to raise the children because the front house is like a museum that's four stories — it's very dangerous. There are no open areas to play, you have all this antique-y furniture, you know, it's just not conducive to raising children, it's not kid-friendly."

It may have seemed a little odd, but Thomas appears to have his children's best interests at heart. And now apparently he's looking for a house that's better suited to kids, all to appease the people of Twitter. How thoughtful.

Thomas' Instagram is full of pictures of his kids alongside little anecdotes about their time together: how he was inspired to teach Kensie to paint, a nightmare-inducing meeting with the Easter bunny, and big moments like birthdays. All the major and minor moments of day-to-day life with kids are represented on Thomas' social media.

Thomas has spoken about what it's like to be a full-time dad, especially because he hadn't had nearly as much contact with his children before gaining custody. All of the past difficulties have led to him trying to shield Kensie and Saint from conflict as much as he can, which meant putting some distance between himself and their mother, Kathryn.

"That's one of the reasons it was best that Kathryn and I go our separate ways," Thomas said in his interview with People. "Because that conflict, all the constant disagreements and arguements, was creating a negative energy that was unhealthy for the children. It was a children-first decision."

Hopefully Thomas and Kathryn will be able to iron out their issues in the future for the benefit of Kensie and Saint, but for now, the kids certainly seem happy.