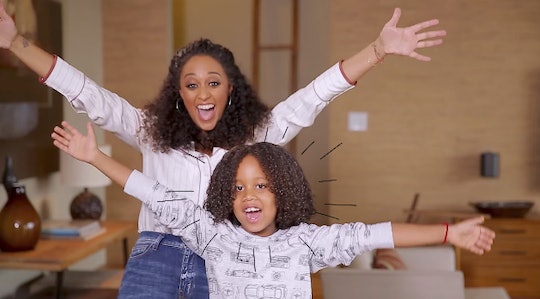 Photos Of Tia Mowry & Her Son Are Seriously The Cutest

Sister, Sister star Tia Mowry is expecting again, much to the delight of her fans. Mowry announced Wednesday that she is pregnant with her second child with her husband, Cory Hardrict. They already have a 6-year-old son named Cree, and photos of Tia Mowry with her son show they are truly part of one of the cutest little families ever, that's only going to get bigger and cuter with the arrival of Mowry's baby.

The actress is also an aunt to her sister's two kids — Aden John Tanner, 4, and daughter Ariah Talea, aged 2, according to People, so she has some practice being around multiple little kids at once. And if the photos of Tia and her son that we've already been blessed with are any indication, she's a fun, fashionable mom who's likely to share more adorable moments with this next baby as well.

Tia announced her pregnancy on her Instagram on Wednesday, according to Us Weekly. In the photo, both her husband and Cree kissed her "baby bump," and it's pretty much the cutest pregnancy announcement ever. Clearly, sharing photos of her family with fans is something Tia is very open to. Her Instagram features plenty of other pictures of Cree, and the two of them together are so adorable, it's hard to even fathom how much cuter photos of them that include the new addition to the family are sure to be.

The Instagram photo was simply captioned with emoji hearts, but they say a picture is worth a thousand words, so maybe Tia felt nothing more than that was necessary.

In true excited aunt style, Tamera Mowry-Housley also shared the Instagram post to her own social media pages, according to TODAY. She retweeted Tia's link to her Instagram photo, and posted, "Yayyyyy! Couldn’t wait to tell the world. I’m going to be an auntie!!!!!" For the record, that was the day after I posted almost exactly the same thing about a new niece or nephew of mine that my sister-in-law is expecting, so I completely understand Tamera's excitement and need to share the news with the world.

Technically, the photo Tia posted is kind of the first one she's shared of the new baby. And in the past, she's posted numerous photos of Cree on her Instagram, which should tide us over until the new little one arrives.

On Thursday, Tia posted a sweet photo of her whole family on Instagram. In the caption, she wished her husband a happy birthday, and Hardrict is lovingly kissing the side of her head in the picture.

But Cree is there too, sitting in Tia's lap and looking off into the distance. Hey, no one said it's always easy to get a toddler to look at a camera.

Another very recent photo of Tia and Cree on Tia's Instagram shows off Tia's style, and displays just how much Cree has grown. The little boy is more than half her size in the picture, at just 6 years old.

In another photo of the whole family, a younger Cree grins at the camera while being hugged from behind by Minnie Mouse herself, which was probably a very exciting experience for the kid. Tia posted the throwback photo on Oct. 20, and she and her husband look like they're having a fun time at Disneyland in the shot as well.

In a much goofier photo from August, Tia and Cree both stuck their tongues out for the camera — a shot a lot of parents can probably relate to and likely have their own version of in a photo album somewhere.

As you can see, Tia doesn't seem at all reluctant to share photos of Cree and herself on her Instagram. Plus, on her YouTube channel, Tia Mowry's Quick Fix, there are a bunch of videos featuring her little guy as well. Hopefully she'll be as forthcoming and open with pics and info about baby no. two.