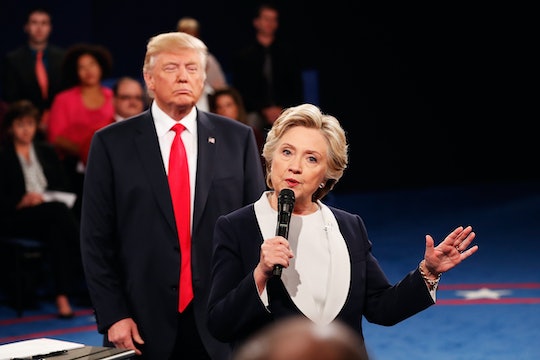 Raise your hand if you're still recovering from Sunday night's presidential debate. *Raises hand* To quote Democratic candidate Hillary Clinton from the first presidential debate: "Whoo! Okay." — followed by her GIF-tastic shoulder shimmy. Clinton handily won the second presidential debate — but Republican candidate Donald Trump won the prize for Creepiest-Looking Candidate of the night. Photos of Trump standing behind Clinton at the debate are the visual embodiment of everything that people find creepy about the toupee-adorned "billionaire." They are also 100 percent certifiably meme-worthy, and the internet has been quick to unleash its devastating Schadenfreude without remorse.

Why was Trump wandering around the debate stage in the first place? Sunday's format was a town hall style debate that allowed the candidates to walk freely around the stage to address a carefully curated audience of undecided voters. Both candidates had chairs, but no podiums — although Trump seems to have missed the memo that said he could have sat down whenever he wanted. My guess is that Trump stood for the entire 90-minute debate Sunday night after widespread criticism for leaning on his podium at the first debate while calling Clinton's "stamina" into question at the same time. But Trump's overcompensating body language at the second presidential debate was just a weird mix of hilarious, creepy, and awkward. See for yourself.