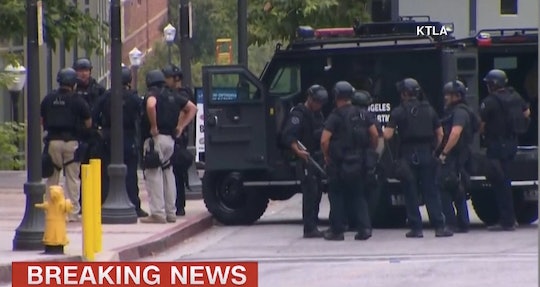 On Wednesday, news that an active shooter was potentially roaming campus after killing at least one victim inside a UCLA academic building prompted university and law enforcement officials to implore students, faculty, staff, and visitors to shelter in place. "Go to a secure location and deny entry (lockdown) now!" read an email from the university sent just after 10 a.m. PT. The campus widely did as instructed, and students and others used social media to alert friends and family that they were safe, as well as to express their fears, anxieties, and coping mechanisms in a situation that has become all too familiar to the American psyche. As a result, the world has now seen photos of UCLA students jury rigging door locks during the aftermath of the shooting to protect themselves, since, alarmingly, many of the rooms on campus lacked actual locks or the ability to secure doors from the inside.

Police have now determined that the shooting was a murder-suicide (the male victims have not yet been identified) and that the campus is now safe, but information was not widely available during the frantic time immediately following the shooting. A mass shooting in nearby San Bernardino killed 14 in December, a fact that was undoubtedly on some students' minds as they scrambled to secure doors to classrooms and construct other makeshift barricades to protect themselves as instructed.

A 20-year-old UCLA student named Rafi Sands, for example, told The Los Angeles Times that he, along with about 30 other students, used belts to secure their classroom door as they learned some conflicting accounts about what was going on on their campus through social media and text messages.

Others, such as student Jason Schechter, who said on Twitter that he was in a fourth-floor computer lab when the lockdown was announced, used a barricade method:

According to the crowd-sourced Mass Shooter Tracker database, a mass shooting is defined as a incident during which four or more people are injured or killed by gun violence. Because two people died, the situation Wednesday at UCLA isn't technically included in the category. But the PBS NewsHour deemed 2015 "the year of mass shootings," reporting that 372 such incidents over the course of the year killed 475 people in the United States, so, sadly, these types of situations are starting to feel unnervingly commonplace. That's why it's not so much of a stretch to think that some students may have devised a plan about what to do if a shooting happened on their campus while they were gearing up for finals.

And there no doubt that many at UCLA were scared for their lives and safety. Freshman Teddi Mattox to CNN that she was in the cafeteria when she heard news of the shooting:

We got the alert and a woman said, "This is not a joke, everyone get to the back of the dining hall because we have to stay away from the windows." We're crowded back here, we've been here for at least an hour and a half. People are crying, they're nervous, they're shaking ... I have not stopped shaking for the last hour and a half.

Considering the 1999 Columbine High School shooting that killed 12 students and a teacher as well as the two student gunmen, the 2007 massacre at Virginia Tech that claimed at shocking 32 victims plus the shooter and, more recently, last year's shooting at an Oregon community college during which a gunman claimed ten lives before being shot by police (to name just a few), UCLA students had every reason to believe they were in very real danger Wednesday.

I'm really impressed by these students' ingenuity when it came to securing their locations, but the whole thing really makes me want to cry. It's beyond sad (and infuriating, considering the United States' relatively lax gun laws compared many other countries) to think that in addition to the now-familiar sight of ambulances, fire trucks, helicopters, and SWAT armored vehicles arriving on campus, like we witnessed today at UCLA, images of students devising makeshift defense mechanisms against a possible shooter are beginning to feel normal.