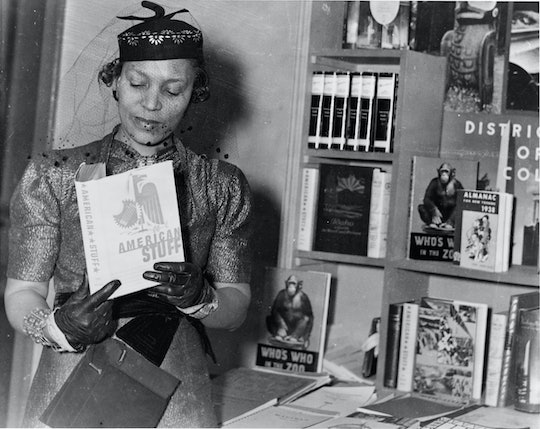 Thursday marked what would have been Zora Neale Hurston's 125th birthday. Hurston, the daughter of two former slaves, lived a remarkable life, made all the more remarkable by the fact that it was lived by a Black woman in the early 20th century. Archived photos of Zora Neale Hurston make it clear that she fought for her recognition as a great American author.

Hurston was born in Notasulga, Alabama, in 1891, but moved to Eatonville, Florida as a toddler, and often claimed the Florida town as her birthplace, according to Biography.com. The University of Florida's digital archive noted that Eatonville had the distinction of being the first incorporated African-American community, and Hurston's father, John, was the town's preacher and eventually served as mayor for three terms.

Growing up with this relative privilege in the insular community temporarily shielded Hurston from some of the harsh realities of life at the time, but that all changed when her mother, Lucy, died. Hurston's father remarried and Hurston was sent away to boarding school, but her father eventually lapsed on her tuition payments, and she was forced to leave. Hurston worked as a maid to support herself, and although she never technically finished high school, she was eventually able to attend Howard University and later Barnard College, according to History.com. Photos of the acclaimed author and playwright make it clear that she sought to prove herself.

Hurston traveled the American south, the Caribbean, and Latin America studying local culture and folklore, and published her collected work, Mules and Men, in 1935. It was her best-selling book during her lifetime, earning her a little under $1,000. She received a Guggenheim Fellowship which allowed her to write her 1937 novel Their Eyes Were Watching God, which, at the time, was not well-received.

Hurston continued to publish books, plays, and articles throughout her life, but her career took a downturn when she was falsely accused of molesting a 10-year-old boy in 1948, according to Biography.com. Though she was able to prove that she was in Honduras at the time the alleged incident took place, and the boy eventually recanted his story, her reputation was irrevocably tarnished. She spent the rest of her life publishing small articles in magazines and working as a maid. She died alone in the St. Lucie County Welfare Home in 1960, and was buried in an unmarked grave.

In 1975, Alice Walker sparked renewed interest in Hurston with her Ms. magazine essay In Search of Zora Neal Hurston. Walker was able to approximate the location of Hurston's grave and place a marker for her. Hurston's anthology I Love Myself When I Am Laughing... And Then Again When I Am Looking Mean and Impressive was published posthumously in 1979, and in 2005, Oprah Winfrey and Quincy Jones produced a TV movie adaptation of Their Eyes Were Watching God starring Halle Berry and Michael Ealy.

Their Eyes Were Watching God has become a book read in high school classrooms around the world. TIME's book critic wrote in 1937 that the important book would embarrass while people and that they would probably rather avert their eyes from the ugly truth that was how black people lived and were treated. Her book forced people to recognize that "Negro life is violent," according to the critic, Roger Rosenblatt wrote, according to TIME:

A young black girl like Janie of Zora Neale Hurston’s novel Their Eyes Were Watching God (1937) may see that she is beautiful, but how can black be beautiful if the standard of beauty is to be white, blond, fair? How can black be good if cleanliness (whiteness) is next to godliness, if Satan is the Prince of Darkness, if there are blackguards and blackmail, black thoughts and black deeds? To be in the dark is one thing, but to see the light is quite another.