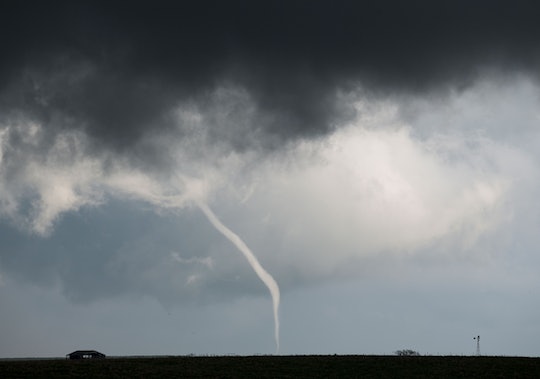 On Monday, two tornados ravaged parts of Oklahoma, resulting in at least two fatalities and massive damage. Photos and video of the Oklahoma tornadoes later posted on social media too show just how destructive the weather beasts really were. And the storm isn't done yet.

The first tornado hit southern Oklahoma on Monday before another formed and began heading northwest toward Sulphur, Oklahoma, according to CBS News. The threat is still not over, according to the National Weather Service, which issued tornado warnings for parts of Oklahoma, Arkansas, and northeastern Texas until around 9 p.m. CT on Monday.

In Wynnewood, a 70-year-old man was killed and another was declared dead near Connerville, Associated Press reporters later confirmed. As of Monday night, weather officials are expecting a lot more damage to be done in Oklahoma and the surrounding area. Oklahoma police have already closed a 5 mile stretch of Interstate 35, connecting Oklahoma and Texas. According to a local Fox affiliate in the area, meteorologists are expecting up to 111 mph winds in the area between eastern Oklahoma and central Arkansas. Weather officials expect hail from eastern Texas to southeastern Kansas well into the evening, according to reports.

If you've never lived through one, tornados can seem like a freak of nature. They sort of are, or they are crazy enough to make even sane social media users in affected areas grab their phones to try and document them. Just a few of the following photos are enough to make anyone stop and marvel — even if the eye of the storm is just miles away from one's home:

For many in the area, violent weather like today's was sort of just par for the course:

Although people are taking pictures and gasping at the sight of the storms, they are very dangerous and have wreaked havoc across the country throughout the weekend, even if the damage seems slight at first glance. According to CNN, officials in Oklahoma are currently working on clearing debris and roads and taking stock of the damage to homes in the area.

For many in Oklahoma, Monday was dedicated to digging through the heartbreaking debris of what were once their homes and businesses:

Keli Cain, the public information officer of the Oklahoma Department of Emergency Management, told CNN that they were expecting up to eighteen tornados. "It could definitely be a long night for storms. We don't know when they are expected to weaken," she said.

Monday night should be the worst of the weather, as "hail as big as baseballs" were already reported in Texas over the Mother's Day holiday. The effects of the tornados this weekend will carry on throughout the week.

Since the winds, rain, and hail aren't expected to slow down until Tuesday, it's best that everyone heeds the warnings to stay inside and stay safe. Fight that urge to Vine the tornado — or at least leave it up to the professionals.