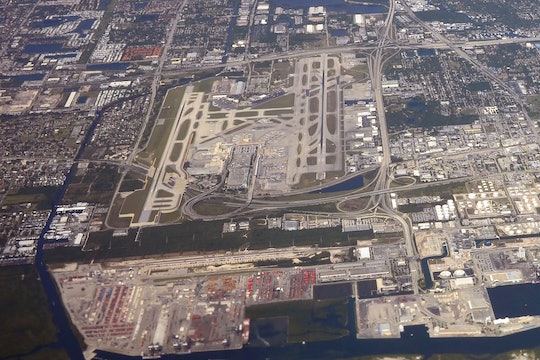 The Scene At Fort Lauderdale Is Troubling

On Friday afternoon, at least eight people were injured and five people were killed during a shooting at the Fort Lauderdale-Hollywood airport, according to CNN reports. There is currently a suspect in custody, while the surviving victims have been transported to a local hospital. Footage at the airport proves just how scary of a time it is for those present for the shooting. As seen in photos and videos of the Fort Lauderdale airport, the scene has been organized by law enforcement in hopes to keep others safe.

It appears that the airport has gone on lockdown after the shooting took place, a usual precaution to contain any future activity that may put airport goers at risk. The New York Times reports that officials chased the suspect through the airport, before containing him in custody. The sheriff's department eventually released an updated toll count, marking the confirmed deceased at five, with eight (at the time) injured.

Photos have been released and circulated by many outlets, and the images and videos are just as alarming as the news. In many of the photos, stranded travelers on the tarmac are shown crowded, most likely waiting for the next step in safety.

While news still comes in regarding the shooting, it was reported by New York Times that Barbara Sharief, a Broward County commisioner, told CNN that the shooter was "lone" and there isn't any evidence supporting that he acted with someone while opening fire in the terminal.

One voice in the commotion has been Former White House Press Secretary Ari Fleischer, who was at the airport during the initial shooting. He first reported the shooting around 1 p.m. EST, without much news. Moments later, he was able to confirm with law enforcement, and share with his followers that "The police said there is one shooter and five victims."

Fleisher then tweeted that things seemed to be "calm" now, but the people were still being kept in the area for further precautions.

More Like This
Mom Gave Birth On The Side Of The Road... With Her Five Other Kids In The Car
Prince George Has Apparently Known He'll Be King Someday For A While Now
These TV Show's Graduation Episodes Will Tug At Your Heartstrings
Travis Scott Is Passionate About HBCU Education & Put $1 Million Towards It