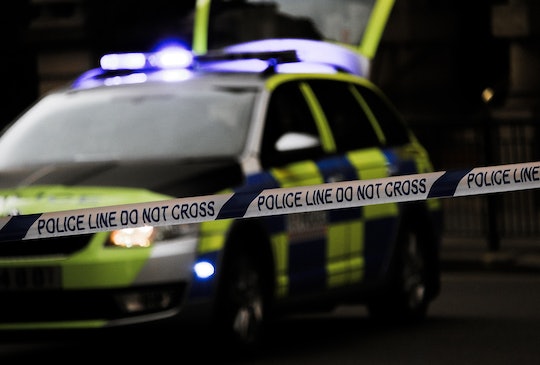 Police are characterizing a shooting event that took place at a San Bernardino, California, elementary school Monday morning as a murder-suicide. The incident reportedly took place inside a classroom and resulted in two students being sent to the hospital. It's yet another installment in the plague of mass shootings that continues to devastate the United States, so photos and videos of the North Park Elementary School shooting paint a picture of yet another school and community in crisis mode.

According to The Los Angeles Times, the violence erupted shortly after 10:30 a.m. local time. Soon, authorities were reporting that at least four victims were being treated for injuries and that a suspect had been either killed or apprehended. But the narrative shifted to an even more devastating frequency as even more horrifying details emerged. According to the Associated Press, two adults are dead after the shooting, in addition to the hospitalization of the two students.

"We believe this to be a murder suicide," San Bernardino police chief Jarrod Burguan tweeted. "Happened in a class room. Two students have been transported to the hospital."

Students were evacuated to nearby Cajon High School for safety, and their parents could pick them up there, USA Today reported. San Bernardino City Unified School District spokeswoman Maria Garcia told the Associated Press that the shooting had happened as the result of a domestic dispute, and that the two students had been airlifted to the hospital.

So far, neither the suspect nor any of the victims have been publicly identified.

San Bernardino has assumed the national stage as the result of tragic gun violence before. In December 2015, a husband and wife killed 14 people and wounded 21 others when they opened fire at a workplace holiday party there.

A news conference about the more recent shooting is scheduled for Monday afternoon, The Washington Post reported. And at around 11:40 a.m. local time San Bernardino County Fire Department spokesperson Eric Sherwin said that the situation had "stabilized" when he confirmed that there were multiple victims.

Even though the immediate danger associated with the harrowing situation seems to have passed, the emotional toll this mass shooting is taking on the community is evident. Southern California News Group photo editor Rick Sforza headed to the place where parents were picking up their children to talk to them about the ordeal.

Sforza also captured some footage of first responders dealing with the aftermath of the situation.

The hard work Sforza and others put into documenting this situation is crucial. Still, the people of the United States can only hope that it's work they don't have to do again, because no one wants to see news of another mass shooting.