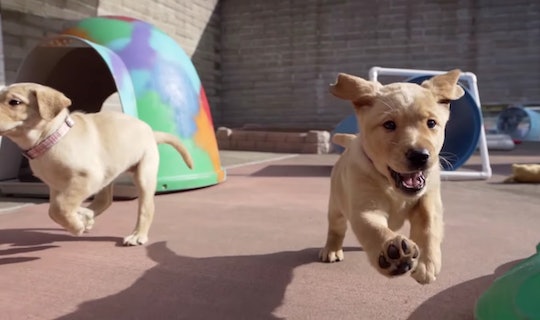 While Disney+ subscribers aren't likely to be struggling for something to watch anytime soon, the new streaming service already has plans to debut an adorable new docu-series next month. Pick of the Litter on Disney+ follows six Labrador Retrievers as they train to become guide dogs with Guide Dogs for the Blind. And while six wiggly puppies seem like reason enough to add the upcoming series to your list of must-watch shows, Pick of the Litter is also a great opportunity for kids to learn about the important work guide dogs do. What's more, the series is also a surprisingly suspenseful tale full of ups and downs.

More Like This
Peppa Pig Is Going Camping In A New Live Show & You’re Invited!
Everything There Is To Know About The Friends Reunion
The Great-Granddaughter Of Alice In Wonderland Is Getting Her Own Show
Here Are 25 Shows You Can Feel Good About Your 2-Year-Old Watching

Although based on an award-winning 2018 documentary of the same name, Pick of the Litter is an original Disney+ series. Over the course of six episodes, it introduces viewers to Paco, Pacino, Tartan, Tulane, Amara, and Raffi — six Labrador Retrievers training with Guide Dogs for the Blind volunteers for what Disney+ has called "the ultimate canine career."

But as Pick of the Litter shows, becoming a guide dog isn't easy and not every pup is suited to take on the job. "It's really hard to become a guide dog," a narrator said in the series' official trailer. "It takes a very special, confident dog to be able to do this job."

So which puppies will have what it takes to make it as a guide dog? You'll have to tune in when the docu-series premieres on Dec. 20 to find out.