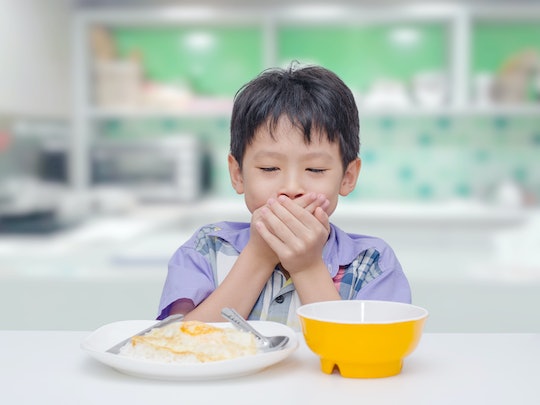 My 7-year-old daughter doesn't have a sweet tooth — she has a mouth full of sweet teeth. Currently, her favorite food is Little Debbie Oatmeal Cream Pies, and she'll beg, borrow, and steal for them. She's also a very picky eater. She likes what she likes, and doesn't like to deviate from her favorites, no matter what technique we try to get her to attempt a new meal. You might find you're in the same boat, and in desperate need of a navigable solution to mealtime woes. Learning how to reward your picky eater in a way that doesn't reinforce bad habits may be that crucial component in getting your kids to broaden their palate once and for all.

There is a surfeit of research available regarding the plight of the picky eater and their parents. The general consensus is that no matter what you do, food should not be treated as a reward or a punishment, according to researchers from the Mayo Clinic. All food is acceptable in small doses, from chicken nuggets and ketchup, to apple pie a la mode. But if your child starts viewing dessert as an object to obtain — as opposed to a normal part of the routine — it will elevate that food in their minds and make it more valuable and therefore more enjoyable than the other foods, beginning a pretty vicious cycle of chore versus reward.

I'll be the first to admit that my daughter comes by her love of the sugar honestly. I have a deeply unhealthy relationship with sugar that started as a child. Like any good millennial, my lunch boxes were filled with Hi-C Ecto Cooler, chocolate fudge frosted Pop-Tarts, and even honey roasted turkey slices, complete with a generous coating of sugar. And school lunches in the '90s weren't any better. Chocolate milk or a smooth Chilly Willy orange juice beverage washed down canned pears in syrup and peanut butter on white bread. Plus, if you had $.25, you could get a sweet, sweet school cafeteria chocolate chip cookie that weighed more than the sandwich. I'm now in my 30s, and my love affair burns strong. (I could also go for one of those cookies.)

I don't want that for my daughter. I want her to have a healthy relationship with both nutritious foods and with sweet treats. I worry that I'll send her into the same patterns I fell into if I let her have sugar, but if I don't, what message does that send? Lee Gibson, PhD, a researcher in biopsychology and director of the Clinical and Health Psychology Research Centre at University of Roehampton in London, told NBC News that "Parental anxiety won't help," and that picky eaters are normal and common. Gibson also said that it isn't a matter of how to reward your picky eater in a way that doesn't reinforce bad habits, but instead, it's a matter of creating a routine. Children will naturally follow the example of their parent, so reinforcing your own love of healthy, nutrient-rich foods at dinner will encourage your little one to try more varied foods. Just keep it up — pattern and routine is often what leads to the most progress.

Jerry Bubrick, PhD, a clinical psychologist at the Child Mind Institute, noted on the institute's website that that you should let your child's reward and treatment be that they get to play an active, participatory role in the foods that they're eating. He suggested making a list of foods your child wants to try and then another list of things you, her parent, thinks she should try, and to work together to try some off of each list. This will also give parents a clue as to what their kid's triggers are. Is it the texture, flavor, or smell that's putting them off? Lack of sugar? By seeing it all on paper, you can figure it out how to improve their eating habits.

In the end, it's not a perfect science — so little of what is done to adapt behaviors is. Instead, it's all about accepting that not every meal will be a nutritional powerhouse with all the recommended percentages of vitamins. It's about the small inroads you make at each meal that steer the course of your child's habits and lay the foundation for a healthy future. And sometimes, it's just about giving them some freaking chicken nuggets with a bowl of ketchup, because at least it's something.