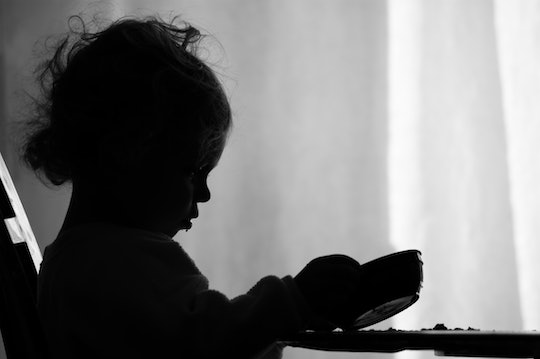 ‘Picky Eating’ Won’t Make Your Kid Blind, & Parents Like Me Want You To Understand Why

Earlier this month, news about a teen who “went blind from eating French fries” went viral, and parents of “picky eaters” were up in arms. Headlines proclaiming that junk food caused the blindness and that a “fussy eater” went blind from malnutrition freaked out even the most laid back of parents. Most of these articles sensationalized what happened to the teen boy, and drew dangerous and unhelpful assumptions about “fussy eating” and “eating disorders” – for example, one report claimed, “’Fussy eating’ that is restricted to junk foods and causes multiple nutritional deﬁciencies is an eating disorder.” For the record, “picky eating” is not an eating disorder, and there’s more to Avoidant/Restrictive Food Intake Disorder (ARFID) than just being “fussy” when it comes to food.

While the story brought much needed attention to ARFID and touched briefly on the characteristics, I saw a complete lack of acknowledgment that ARFID is a serious mental health disorder. In the articles I read, there was no mention that treatment is possible, which had to be extremely disturbing to parents who were just learning about the disorder and worrying their children might have ARFID. The online conversation didn’t touch upon the overwhelming anxiety and depression that accompanies ARFID. Nowhere did I see discussed the isolation someone with ARFID feels, or the way the disorder truly affects the whole family. Rather than showing ARFID for what it really is, in most of these articles, I saw the blame being placed on the child and the shame on the parents.

Five years ago, if you googled ARFID, or extreme picky eating or my child only eats white food, the search would yield nothing. I know, because I was desperately searching for a name for what I didn’t know my 15-year-old daughter had been suffering from for most of her life. For years, my daughter refused to try new foods and mealtimes were a constant struggle – with bribing, begging, bartering, and bawling. It wasn’t until we expended all other efforts to learn what was wrong with her and took her to an eating disorder center that we discovered she had ARFID.

I have firsthand experience on how ARFID affects a person (and the whole family), and it is distressing to see misinformation about the disorder spreading online. The symptoms that accompany this disorder are intense, and the fact that it’s being misinterpreted as “picky eating” is extremely troublesome. ARFID kept our daughter isolated and depressed, and there were instances of severe panic and anxiety because she feared food.

People with ARFID think, ‘If I eat that, I will die, or I’ll die from choking on it.'

She explains that this anxiety and distress constricts their bodies in ways that makes taking in food and digesting it very difficult.

“People with ARFID think, ‘If I eat that, I will die, or I’ll die from choking on it,’” DiRé continues, noting that ARFID is a mental health disorder that wasn’t classified in the DSM-5 until 2013. That classification, she says, “helped a lot of people and families of children identify that this is a valid disorder, rather than a growth phase of ‘picky eating.’”

After my daughter was diagnosed, she completed a 20-week, intense outpatient therapy program at Healthy Futures, in Scottsdale, Ariz. DiRé helped our daughter by incorporating somatic experience therapy, which was a predominant factor in her recovery. This type of therapy is a combination of touch and talk and works by “balancing the nervous system,” says DiRé. “One of the treatments of somatic touch therapy for ARFID is shutting off the adrenal system that is overwhelmed.” This type of therapy calmed my daughter’s overloaded adrenal system which made her less anxious and more open to trying new foods. Her therapy also included peer group (although she was the only one in her group who was diagnosed with ARFID), food graphing, family sessions, and one-on-ones with her nutritionist and therapist.

DiRé explains that ARFID is a “sensory eating disorder,” which is different from anorexia, bulimia, and binge eating because people with ARFID don’t restrict because of body image or self-esteem issues. In fact, she says, “The tendency for eating disorder practitioners is to place ARFID patients into an anorexia treatment, which actually increases the symptoms.”

Mia Elwood, a licensed clinical social worker and the owner of Healthy Futures, says they treated their first ARFID patient, a 14-year-old male, in 2007. They continue to use somatic experience therapy and various physiological, non-talk-based ways of treating patients in order to address the nervous system. “We understand that ARFID is different than any other eating disorder, so while we can help them with anxiety, family, trauma and other mental health and nutritional concerns through our more conventional approaches … we will not fully help someone heal until we affect their nervous system.”

It’s frustrating that ARFID gets correlated with ‘picky eating’ like it is a choice for these kids.

Julie McVoy, who has a 19-year-old daughter with ARFID, says that while she’s encouraged that ARFID is now being mentioned in the media, an article she read about the recent story lacked information. “It gave almost no detail about the nutritional deficiency that caused the boy to go blind and how treatment could have prevented it,” McCoy says, who lives in Media, Pennsylvania. “I felt it was a missed opportunity for education on a little known condition that few people have heard of — even many people who suffer from it.”

Chrissie Coon from Hamilton, Virginia, has an 18-year-old son who has battled with ARFID his whole life. She says, “It’s frustrating that ARFID gets correlated with ‘picky eating’ like it is a choice for these kids. It is a psychological aversion to taking food in that results in dire health conditions resulting from a lack of nutrients – in severe cases, malnutrition.” Coon fears the media is spreading misinformation about a psychological disorder that plagues real families, simply by labeling it as “picky eating.” She says, “That’s like telling people who suffer from depression to just be happy.”

There is good news though. ARFID is treatable, and people can recover from it, as was the case with my daughter, who is now 20 and a normal eater. Her depression, anxiety, and fear over food are gone. The news story of the teen who went blind is horrifying, and something that no parent would ever want for their child. “I feel great empathy for this family and the boy, as they only did what they knew and what all the specialists they went to knew,” Elwood says.

And while I hurt for that teenager who is now blind, and I can’t imagine where he and his family go from here, people need to know the facts about ARFID. It’s not yet understood by the mainstream, but more people are discovering that it’s an eating disorder and that it needs to be treated in a specific way. Our family spent more than a decade wondering and worrying, and when we finally had an answer to my daughter’s problem, we were able to find the proper treatment and take some of the panic off our plates.