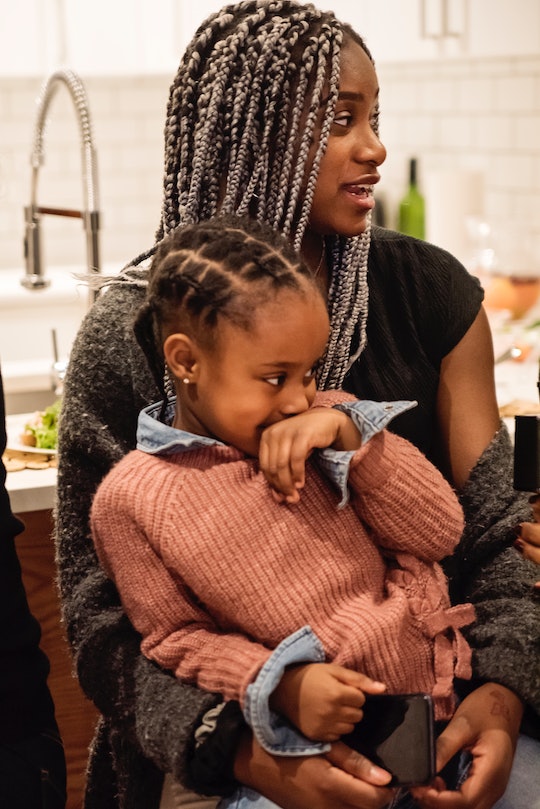 PSA: Experts Say It's Absolutely OK If All Your Kid Eats At Thanksgiving Is Pie

Kids can be shy, picky eaters. If there is a crowd, and a table of unfamiliar food, they suddenly have somewhere else to be — especially in a house full of cousins and grandparents. It's frustrating, but trust: it's really OK if your kid only eats a roll at Thanksgiving. Seriously, it's a likely scenario.

Getting your kids to eat a well-balanced meal is difficult at the best of times. Throw in a ton of cousins, your weird uncle who smells like auto shop grease (even though he's an accountant), and a seriously overwhelming amount of food, and there's likely going to be a roadblock. This is before you factor in that the food served is so far removed from what they're used to eating on a regular basis. (Seriously, how often does anyone make stuffing or cranberry sauce?) It's food that many adults are excited to eat because we've learned to appreciate it for all of its difference and extravagance, but for kids whose regular diet consists of the same cereal every morning, and macaroni and cheese a minimum of three days per week? It's unappealing at best. But rest assured, they will eat eventually, settling back into a familiar routine as soon as the holiday has ended, and you can go back to worrying only about their dismal vegetable intake.

I spoke with registered dietitian Chrissy Carroll of Dairy Free For Baby, and she tells Romper that it's truly no big deal if your kid eats one bite of turkey at Thanksgiving or just a roll. "I wouldn't worry about this at all. Kids are generally great at self-regulating, but obviously the excitement of the holiday can throw off their routine. (Friends to see! Cousins to play with!)" Children thrive on their routines, and a disturbance in it can throw off their entire day. And Thanksgiving is just one big disturbance that starts with watching a parade and ends with adults asking them what they want for Christmas. Carroll notes that we need to understand this and look at it from the kids' point of view. "If they only pick at a few bites on Thanksgiving, they'll likely be hungry to eat a filling breakfast the next morning." (Even more Cheerios than normal.)

There is a caveat. Carroll says, "If you know your kiddo will eventually get hangry, try just leaving their plate out for an hour — or popping it in the fridge for later. They might come back to pick at it after dinner." When everyone is gone, you know they'll likely be starving.

But Thanksgiving can also be a fun food-learning experience, says Mitzi Dulan, RD, CSSD. She tells Romper that she "would encourage kids to try at least three different foods for Thanksgiving, especially since there are so many options like sweet potatoes or stuffing." You're not asking them to eat a plate full of weird food, but instead, you're offering a few bites of something new. And seriously, how many bites of sweet potato casserole does it take before they'll wonder why this is not a staple food served at every meal? (It is one of the world's perfect foods. Yes to marshmallows, yes to pecans, no to whiskey sauce, thank you very much.)

Dulan cautions parents not to make it a battle at the already overwhelming Thanksgiving table, because that won't end well for anyone. In-laws will judge you, your mother will sneak them pumpkin pie when you're not looking, and your kid will get frustrated. Thanksgiving, and really any holiday, is about the juxtaposition between expectations and reality, and it doesn't always end evenly. So pass them the butter, keep a stash of rolls warm and ready, and just let it happen. They'll come around eventually.