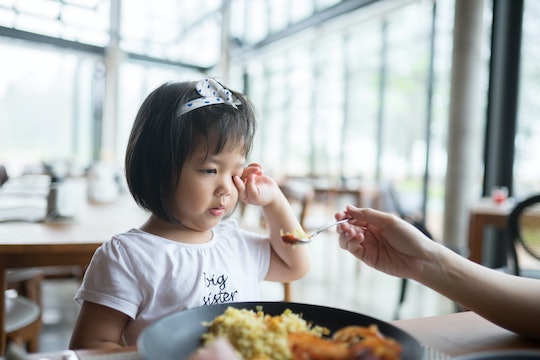 Struggling to get your kid to eat can be incredibly stressful for a parent. It's often really hard to tell what's behind a mealtime battle. Is the child genuinely not hungry at that moment? Are they just being stubborn? Or is there something more serious going on with them? Figuring out the difference between a picky eater and having an eater disorder isn't always easy, but experts say there are a few main things that set the two issues apart.

Picky eating, though frustrating to deal with, is much more common than an eating disorder. Amanda Smith, the Assistant Program Director at Walden Behavioral Care, tells Romper picky eating is a normal part of a child's development. "They’re learning to say no, they’re trying to find their boundaries, they’re developing a palate.”

Dr. Joy Jacobs, a clinical psychologist who works with patients dealing with eating disorders and their families, agrees. "Children can go through phases where they might like different foods and different textures, or not like things that they used to. And that’s just part of the whole maturation process," Jacobs tells Romper. "But it becomes an issue when you can’t get whole food groups in, and their nutrition becomes very unbalanced." That's the point where parents should be concerned about their kid's behavior surrounding food.

Smith says there's a relatively new diagnosis called Avoidant Restrictive Food Intake Disorder (ARFID) that seems to be becoming more common. “It’s like picky-eating to the extreme,” Smith says. Symptoms include refusal to eat certain foods or whole food groups, failure to gain weight, and anxiety or nausea surrounding meal times. ARFID can be diagnosed at any age, but it's most common in young children. Smith says there isn't enough research into ARFID to tell whether there is a connection with developing eating disorders like anorexia and bulimia, but there's one big difference with ARFID patients. “They don’t have body image concerns the way that other eating disorders do.”

There's not necessarily a specific age when eating disorders such as anorexia and bulimia typically emerge, but according to HealthyChildren.org, it's most common in the teenage years. Concerns about weight can show up as young as preschool, however, and it's not a coincidence that heading off to school can trigger the kinds of issues that lead to eating disorders. "Once kids are in school, the body is unfortunately fair game," Smith says. Even kids as young as 5 and in kindergarten aren't safe from being called "chubby" by their peers, from her experience. "That can spark things where they’re going to try to manage their weight," she says.

Both Smith and Jacobs say if you're concerned that your child might have an eating disorder, you should speak to their doctor right away. “The pediatrician is always the place to start, because we always want to rule out that there’s not something else medical going on. A lot of other disorders and things can mimic the signs and symptoms of an eating disorder," says Smith.

And there's one simple, effective strategy Jacobs recommends for parents to stay on top of any potential issues. “One of the best things for identifying eating disorders early on and preventing them is having family meals. Family meals have been shown to be associated with better outcomes across the board — drug use, delinquency rates, grades,” she says. “That also helps to normalize eating behavior, that’s where modeling occurs.”

By modeling healthy eating habits and promoting positive body image themselves, parents have a great opportunity to help their child develop a healthy relationship with food and eating. That holds true whether you're dealing with a picky eater or an eating disorder. Setting a positive example at home is your first and best line of defense.