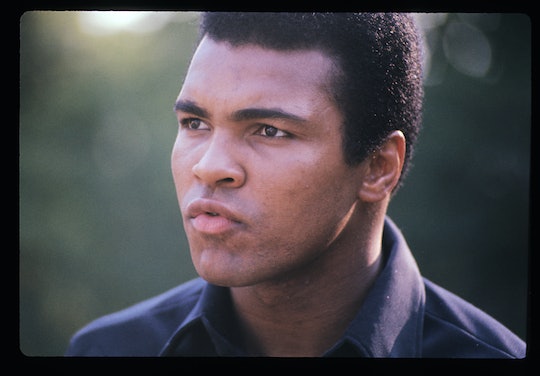 Lebron James and Maverick Carter executive produced a new HBO documentary about the life of Muhammed Ali, narrated by Ali himself through archival footage. The film tracks his career from boxer to social activist in his own words using clips from talk shows, press conferences and interviews. The Hollywood Reporter notes that clips from his "most famous moments" are used sparingly, but viewers tuning in may be curious about more recent photos of Muhammed Ali, after the time period explored in What’s My Name: Muhammed Ali. The heavyweight champion died in 2016 after an over 30-year battle with Parkinson's Syndrome, but he continued to make public appearances in the years leading up to his death.

He chose not to speak in public during his final years, however, as his facility with speech declined. Ali frequently appeared with his daughter Laila, who also became a professional boxer, competing from 1999 to 2007. In 2012, he carried the Olympic flag during the opening ceremonies of the 2012 Summer Olympics in London, helped by his fourth wife, Yolanda "Lonnie" Williams, to whom he'd been married since 1986. He was also awarded the Philadelphia Liberty Medal for his lifelong efforts in activism, philanthropy, and humanitarianism that same year, which he accepted in person.

Born and raised in Louisville, KY, Ali was a University of Louisville football fan and in 2014, he was honored by the Cardinals at an in-stadium event ahead of a game. In 2019, the team played in Ali-themed uniforms, according to Sports Illustrated, and some have even lobbied the school to rename its football stadium after the boxer. (The stadium had previously been named "Papa John's Cardinals Stadium," but the university decided to drop "Papa John's" from the name after owner John Schnatter used a racial slur while discussing NFL player protests, according to SBNation.) Louisville International Airport was also renamed after Ali in 2019, to the Louisville Muhammad Ali International Airport.

What’s My Name: Muhammed Ali made its debut at the Tribeca Film Festival this past year, and will air on HBO as a two-part documentary. It was produced in cooperation with the Muhammad Ali family estate, according to HBO, and had the blessing of his wife Lonnie. She said in a statement about the film, per HBO:

We are at a time in American history when we look to a new generation of heroes like LeBron James to carry on Muhammad’s legacy, not only by remembering Muhammad, as is done so eloquently in this documentary, but also through their own words and deeds. I’m grateful to LeBron, Maverick Carter, SpringHill Entertainment and HBO for advancing the ideals that Muhammad believed in and fought for throughout his life.