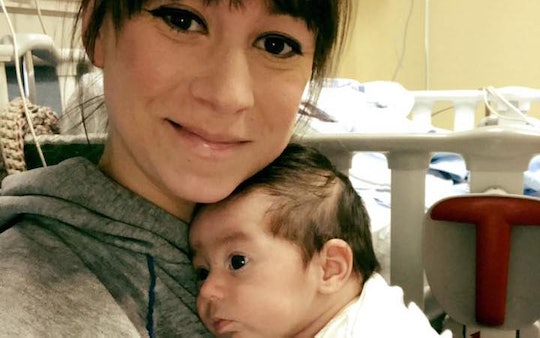 My Baby Was Admitted To The PICU, & I’ll Never Forget What I Saw There

Watching your child spend a week in the pediatric intensive care unit (PICU) as a parent, your world shrinks to the size of a small hospital room, yet you're acutely aware of every single child and parent living in worlds just as small. Your every cell is tuned to your beloved baby and the scary details of their health, yet you cannot help but also think of the mom in the next room, holding her baby's hand. You're selfish and benevolent; self-indulgent and grateful; within and without.

I walked into the emergency room with my 5-week-old son on a Friday. It was raining, but the downpour and what it was doing to my slip-on shoes were the least of my concern. My son's 2-day-old cough had propelled my partner and I to make an appointment with his pediatrician, and after a quick exam we were told we had to take him to the emergency room immediately. His breathing was labored, his oxygen saturation was less than ideal and, since it was only day two of his cough, we were assured his symptoms were bound to grow more dire. So we drove straight from the pediatrician's office to the nearest hospital and, before I knew it, my son was being admitted for respiratory syncytial virus (RSV).

Health care professionals work fast when the words "baby" and "breathing problems" are located in the same sentence, and it's a swiftness that both assures and concerns you. After two days in the pediatric wing of the hospital — two days of vitals, hospital room showers, delivered meals, and slightly burnt coffee — I witnessed that swiftness escalate in a way that made my stomach tie itself to the small of my back. Because when two days of IV fluids and albuterol treatments in the pediatric ward couldn't stave off a fever, labored breathing, a decrease in appetite, and projectile vomiting, my son was rushed to the PICU for careful observation and oxygen treatments.

I stood in the corner of yet another small hospital room — a room significantly more cramped with an overwhelming amount of equipment — holding an overstuffed bag of our belongings and his 10-pound carseat, and watched the nurses connect my son to breathing monitors, a heart monitor, and high-flow oxygen with such speed I felt light-headed. I tried to calm the whispered worries of my anxious mind as three nurses hovered over my newborn, barely registering my presence as they worked with extreme efficiency.

I was both assured and dismayed. I didn't notice the tears as they carved their way down my cheeks.

While chronic conditions are behind 53 percent of PICU admissions, according to the Society of Critical Care Medicine, respiratory illnesses are the most common diagnoses, and children with chronic conditions or congenital disorders will spend longer in the PICU with RSV, per a 2001 study in Pediatric Critical Care Medicine. That is, my son was one of the luckier ones, but that didn't mean it wasn't terrifying.

Tellingly, post-traumatic stress responses in parents to PICU stays have been found to be proportional to parental perceptions of the threat to their child, rather than the severity of illness, per a 2004 study in Pediatric Critical Care Medicine: PICU stays impact parents, and while that might sound obvious the sheer force of that impact is impossible to understand until you've endured it yourself.

There were parents mere feet away from us, unsure if their child would survive; unable to see their futures clearly.

I quickly realized it would be easy to become both transfixed in the PICU and completely shaken in the PICU. One moment the edges of the world would blur and all I could see clearly was my son; tubes and cords that were connected to his body slithering across his caged hospital bed like insidious reptiles looking for an escape that didn't exist. And the next moment a small child would scream or a disheveled adult would cry and the edges of the world would sharpen and cut me out of my trance. The 5-year-old just diagnosed with Type 1 Diabetes, fighting her mother and nurse as she's forced to endure a prick on the finger and screaming, "I want to go home, mommy!" The sobs of a mother as her 3-year-old was incubated, the doctor's faint explanations barely registering over her loud heaves and body shakes. They were all impossible to ignore and heartbreaking in every conceivable way.

By all accounts I was lucky; RSV is very common and treatable and I knew that in a few days my son would improve and we would be sent home.

Staring at him as he slept on a hospital bed, IV dripping and monitors beeping, burnt the deepest part of my chest with sorrow, but there were parents mere feet away from us, unsure if their child would survive; unable to see their futures clearly. I was focused on my son and completely unable to ignore the children, the parents, and the stories surrounding him. My baby was all I could see, but when I looked at him I saw the baby two rooms away; the toddler next door; the mom crying in the hallway; the dad pacing back and forth in front of the nurse's station.

Mothers of children in the PICU are significantly more susceptible to post-traumatic stress disorders than fathers, according to a 2010 Journal of Pediatric Psychology study; a fact that's hardly surprising. When my partner left every night to go home and tend to our older child, I stayed behind, sleeping on a tattered armchair next to my son's crib. While my partner was learning which routes would take him from our apartment to the hospital the quickest, I learned which beeps from which monitors to ignore, and which beeps from which monitors to take seriously. My partner could relax, knowing our 4-year-old would sleep soundly through the night, while I trained my body to sleep through the nurse dropping off my hospital breakfast at some ungodly hour in the morning and wake up if my baby so much as moved in the bed I hadn't left in five days. I trained my mind to focus on my son's face as he screamed through suction treatments, but couldn't keep that same mind from wondering toward the dark place when he slept peacefully for what felt like an unsettling amount of time.

My partner's experience of having a child in the PICU was vastly different than my own. He was shielded from the constant sounds of the PICU — doctors coming and going, nurses hooking up monitors, babies crying through painful exams, and the low hum of late-night television meant to keep anxious parents company; the very sounds that I still, months later, haven't been able to erase.

As my son improved, I disintegrated.

In five days, I grew accustomed to hourly suction treatments, the sound of high-flow oxygen held up to an infant's nose, and the feeling of being perpetually attached to a hospital-grade breast pump. I found a way to exist in the dull ache that accompanies the space between consciousness and unconsciousness; the ache that comes rapidly and without remorse when a human being can only manage to sleep eight hours in five days. I even considered my son's state — the oxygen tube taped to his cheeks, the IV protruding from his hand, the leads on his chest — to be nothing more than customary. It's astounding how quickly a person can change their definition of "normal" and accept their current reality in order to survive it. I was completely outside my element and yet, somehow, at home.

When we left the hospital after five days of care, my son tucked in his carseat and a packed bag filled with bottles signifying five days of dedicated breast pumping, I had body chills, a cough, and a 102 degree fever. I also had signs of postpartum depression, insomnia, and post-traumatic stress disorder. As my son improved, I disintegrated.

Months later and my son, for lack of a better word, is perfectly normal. Every wellness check I implore his pediatrician to check his breathing just one more time, and every time she assures me his breathing is perfectly typical. There's no reason to suggest his five day stay in the PICU will have any lasting impact on his health or wellness, and there's no reason to assume we'll ever be back there again.

But the sounds of the PICU are still with me, and even though months have passed since my son was allowed to come home I often find myself lost in their echoes. His breathing is normal but I can still hear the oxygen pushing through tubes and making its way to his labored lungs. His lungs are clear but I can still hear the congestion and his screams as the nurses tried to clear it with saline and suction.

We're starting to receive bills that quantify the care he received, but I'm still wondering what the nights spent staring at his chest and listening for a labored breath are going to cost me.

More Like This
Can You Burp A Baby Too Hard? A Pediatrician Shares Tips For Gassy Tummies
Is It Good For Babies To Be Exposed To Germs? It’s Complicated
41 Strong & Sweet Baby Boy Names That Start With “K”
Baby Growth Spurts: When They Happen & What To Expect